10 Things To Do In Cootamundra

Cootamundra known as “Coota” is a picturesque country town in the beautiful NSW Riverina an easy drive from Sydney. It can keep you busy for a long weekend! Known for being the birthplace of famous cricketer Sir Donald Bradman. The town has lovely cafes and is an important agricultural hub. Coota is a lively prospering town that holds regular events. There’s usually something going on in Cootamundra. 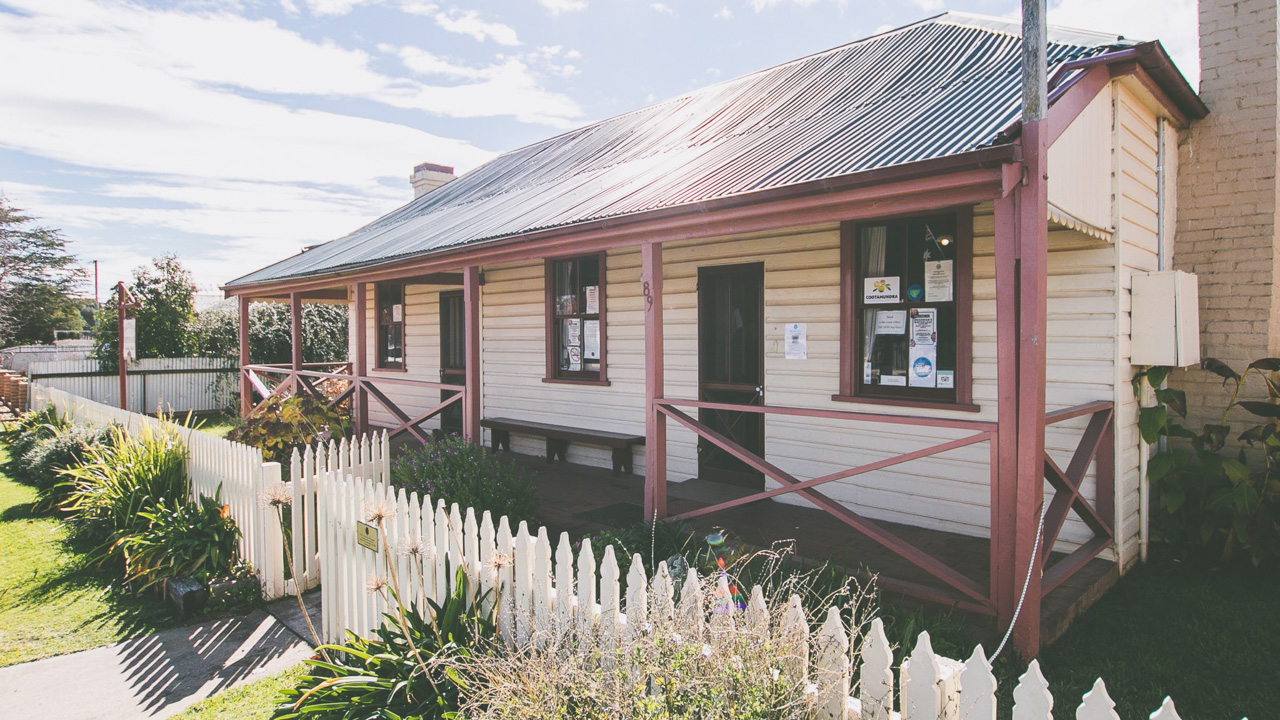 In the front room of the 89 Adams Street building, Granny Scholz, the midwife who delivered the greatest batsman the world had ever known Sir Donald Bradman, operated a private hospital.

After being renovated in 1991, his birthplace has been lovingly restored, with a grand opening for the public on 23rd October 1992. Memorabilia from Sir Don’s birthplace cottage, from cricket, and from the Cootamundra district can be found there.

In addition to the Bradmans Birthplace, the Memorabilia Cottage is also located at 87 Adams Street, Cootamundra. Purchasing and developing these sites was the initiative of the Cootamundra Shire Council. Memorabilia Cottage is a nostalgic display of curios, bric-a-brac, and Australian memorabilia. Located next to Bradman’s Birthplace some of which dates back to the time of Sir Donald Bradman’s birth.

At this adjoining property Peter and Jenny Cash have loaned Council a collection of memorabilia. The collection was built over a long period of time. The owners have painstakingly taken advantage of every opportunity to increase the collection. It is a wonderful sight to see, and will bring back many memories for most people 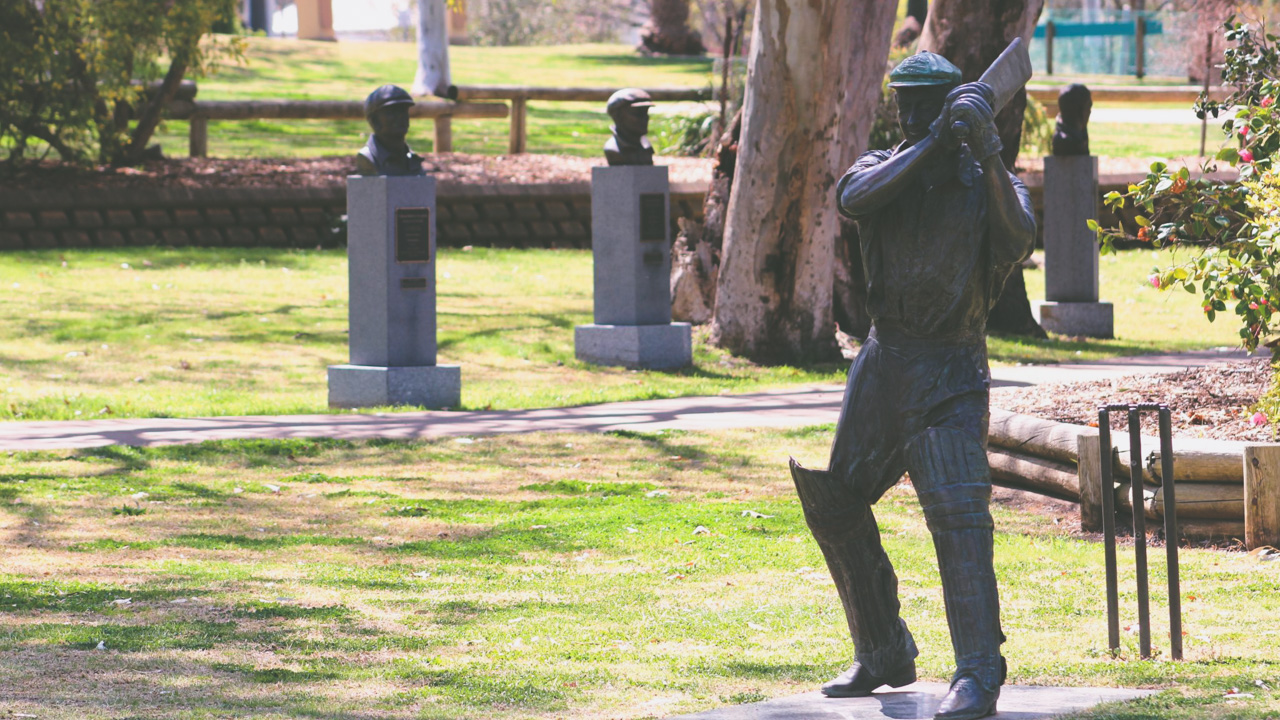 This walk features Bronze sculptures of Australian Test Cricket Captains, including the first aboriginal player to play for the Australian cricket team to tour England, Unaarrimim (Johnny Mullagh). As the birthplace of Sir Donald Bradman and the former home of Bill Murdoch. Cootamundra has strong connections with two Australian test cricket captains. The success of these two players led to a particular interest in cricket by the people of Coota. There is a plaque attached to each bust that details the captain’s cricket record. 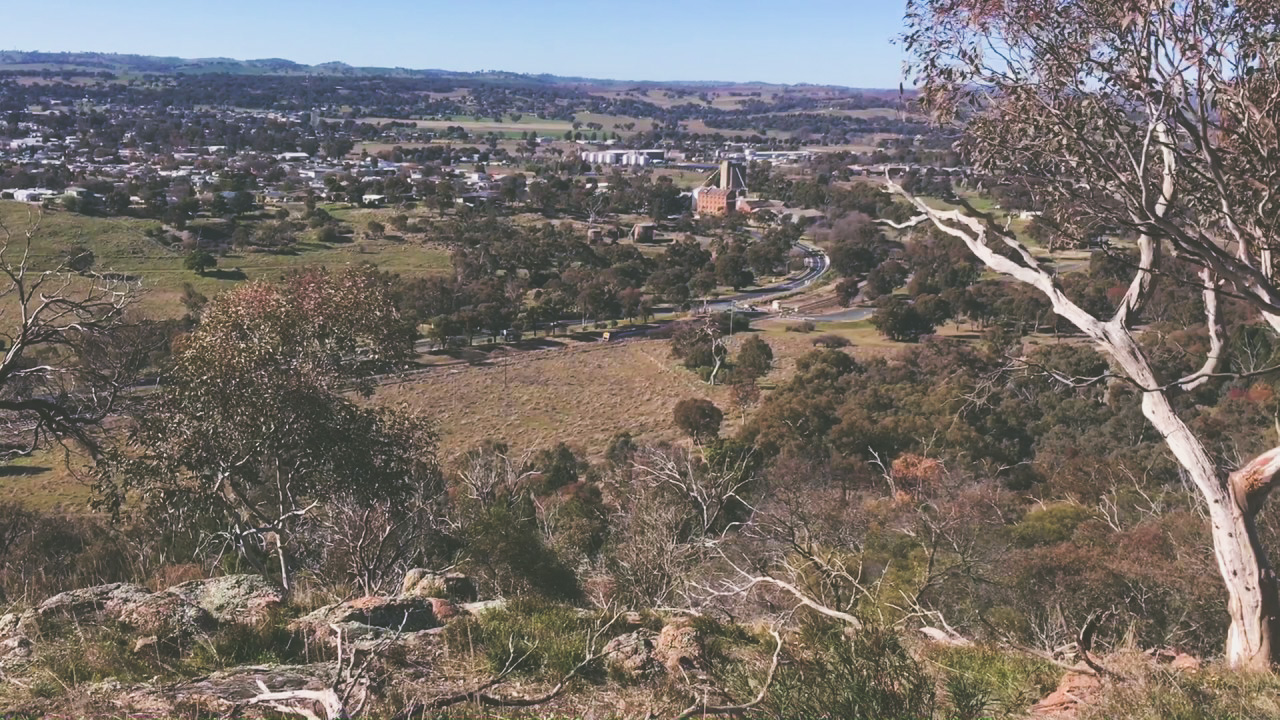 Yellow Box woodlands and a variety of animals call this nature reserve home, including kangaroos, echidnas, kookaburras and koalas. There are many species of birds to see, including white-throated treecreepers, common bronzewings, restless flycatchers, robins, and butcherbirds. Various hiking and mountain biking trails can be found in the park. This one-hour return hike brings you to the top of the park, from where you can enjoy excellent views over the town. The mountain bike trails are difficult and steep. The park has a few black diamond mountain bike trails suitable only for very experienced mountain bikers. 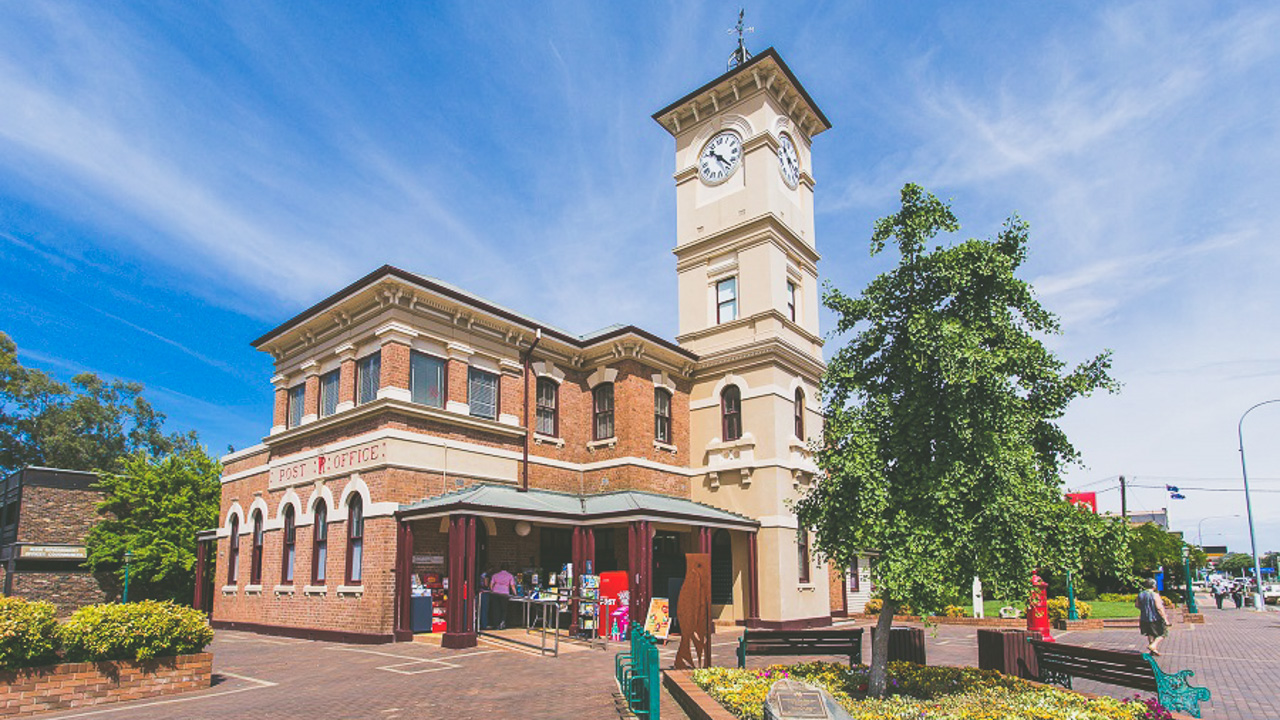 Go for a drive around the town precinct in Cootamundra and admire the architecture. Banks, government buildings including the post office, police station and hospital are all fine examples of early Australian Architecture. They are all well above the standard you would expect to find in a small regional town. The grandeur and architectural style of many of these fine buildings hint to the importance of Coota to the region in earlier times. 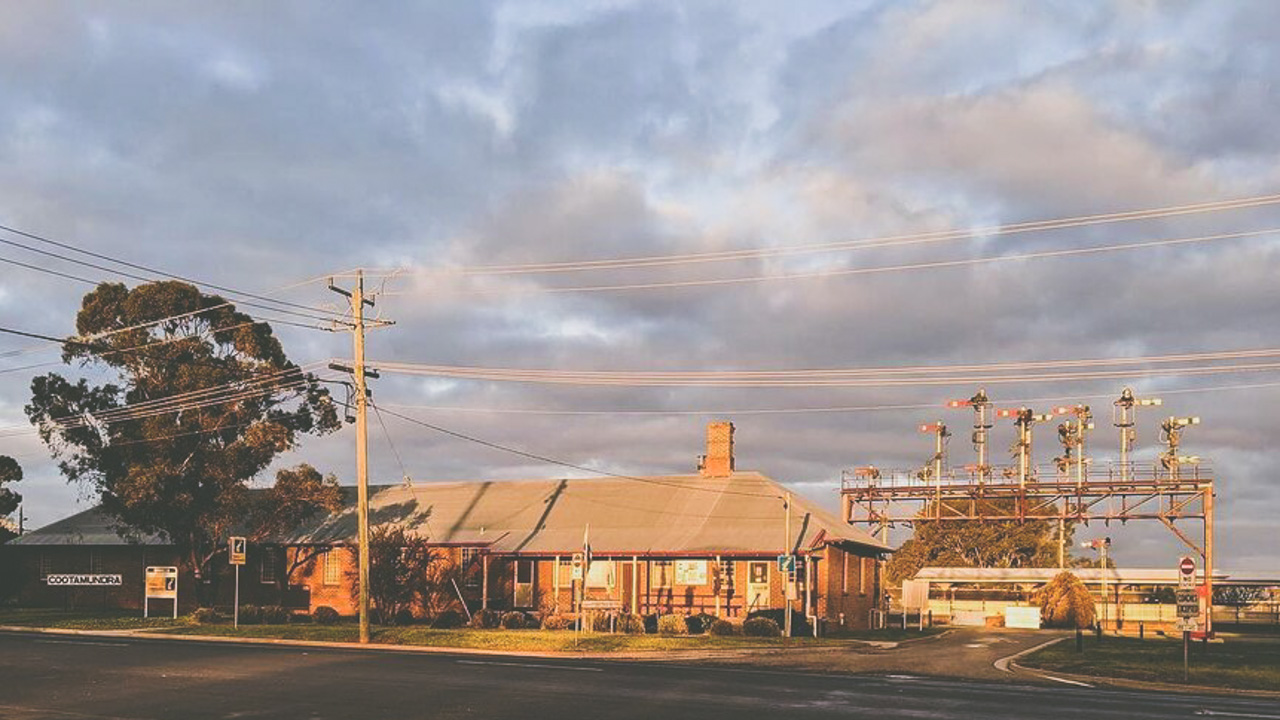 The Cootamundra Heritage Centre was opened back in August 2001. Housed in the once railway barracks and rest house built in 1927.

Cootamundra and district are the focus of this collection. It includes a permanent object collection. Additional to the primary collection are 14 exhibition rooms dedicated to different themes. Themes include the history of the Cootamundra Aboriginal Girls Training Home, Cootamundra at War, Horses and Harness and Home and Hearth. As well as displays on transport history, the RAAF, and aviation.

There is a small committee and team of volunteers that run the Cootamundra Heritage Centre. Make sure to call in have a look around. 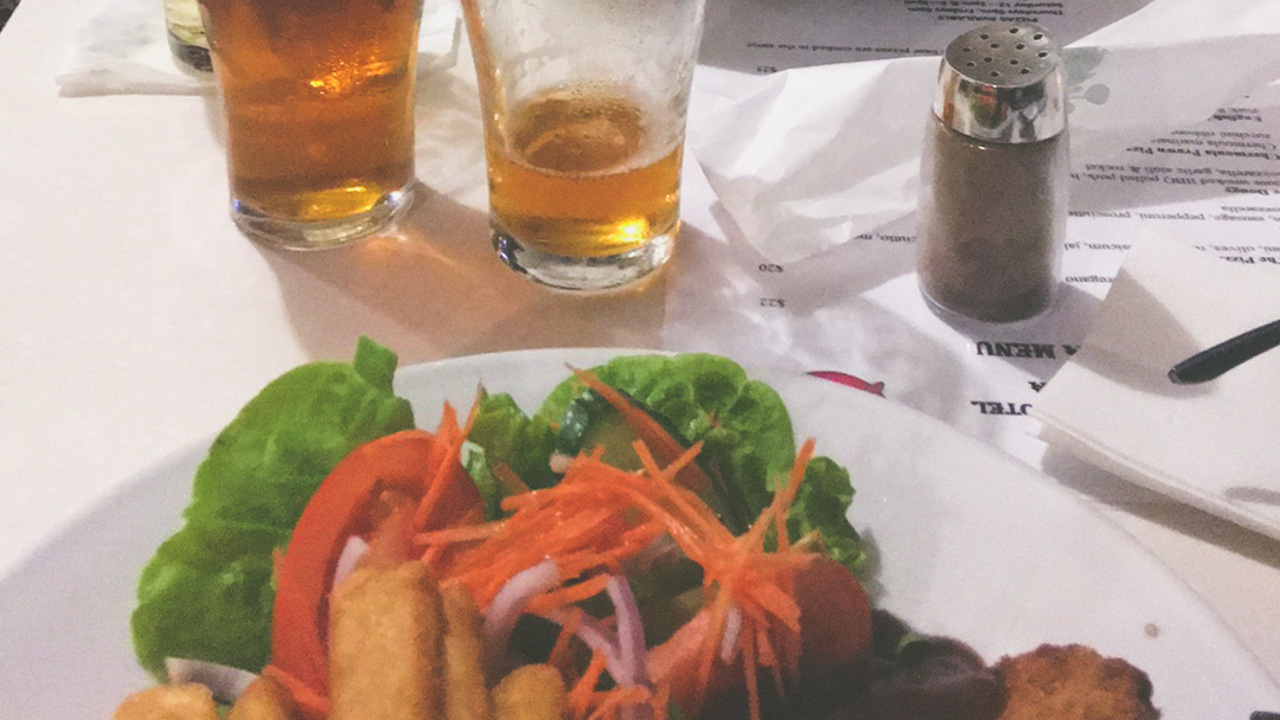 Dinner At The Central Hotel Cootamundra

Have Lunch Or Dinner In A Pub (Or A Beer!)

Currently open and still serving are the Albion Hotel, Central Hotel, Family Hotel and Olympic Hotel. We have eaten lunch and dinner in all of these Coota pubs many times and they are all great. Our favourite is the Family Hotel but we like each of the other hotels in Coota for various reasons. Meals in all Coota pubs are very generous in size and the prices are very reasonable, much cheaper than you’ll find in Sydney or Canberra pubs. If you’re after a quiet pub or a very lively pub Coota has a pub that will suit.

Former hotels in Coota that are either closed or don’t exist are the Cootamundra Hotel, Calman’s Royal Oak Hotel, Railway Hotel, Royal Hotel and Globe Hotel. 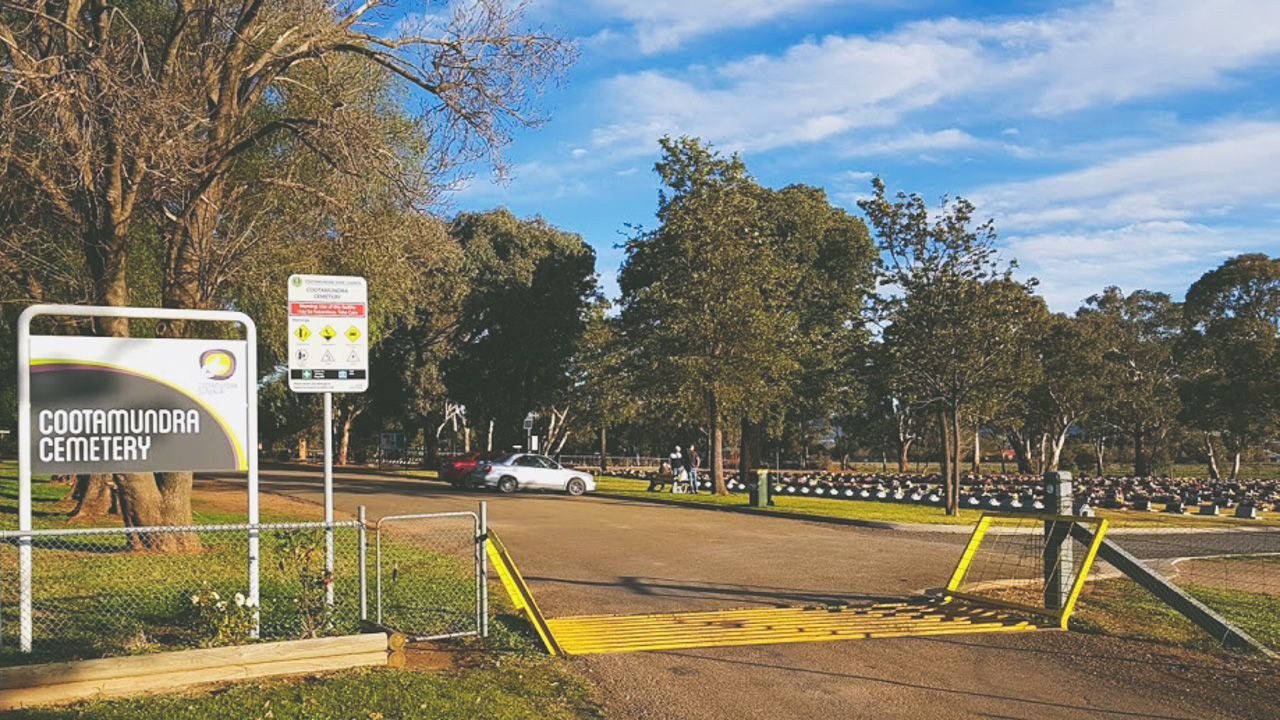 We always visit cemeteries in small towns as they are a window in to the towns history. Cootamundra cemetery is no exception. It’s a fairly large cemetery broken up in to your usual denominational groups. Graves date back to the mid 1800s if you have a good look around. David has many relatives buried in Coota cemetery. In fact Amanda and David will more than likely end up spending the rest of eternity within the cemetery grounds (pun intended). 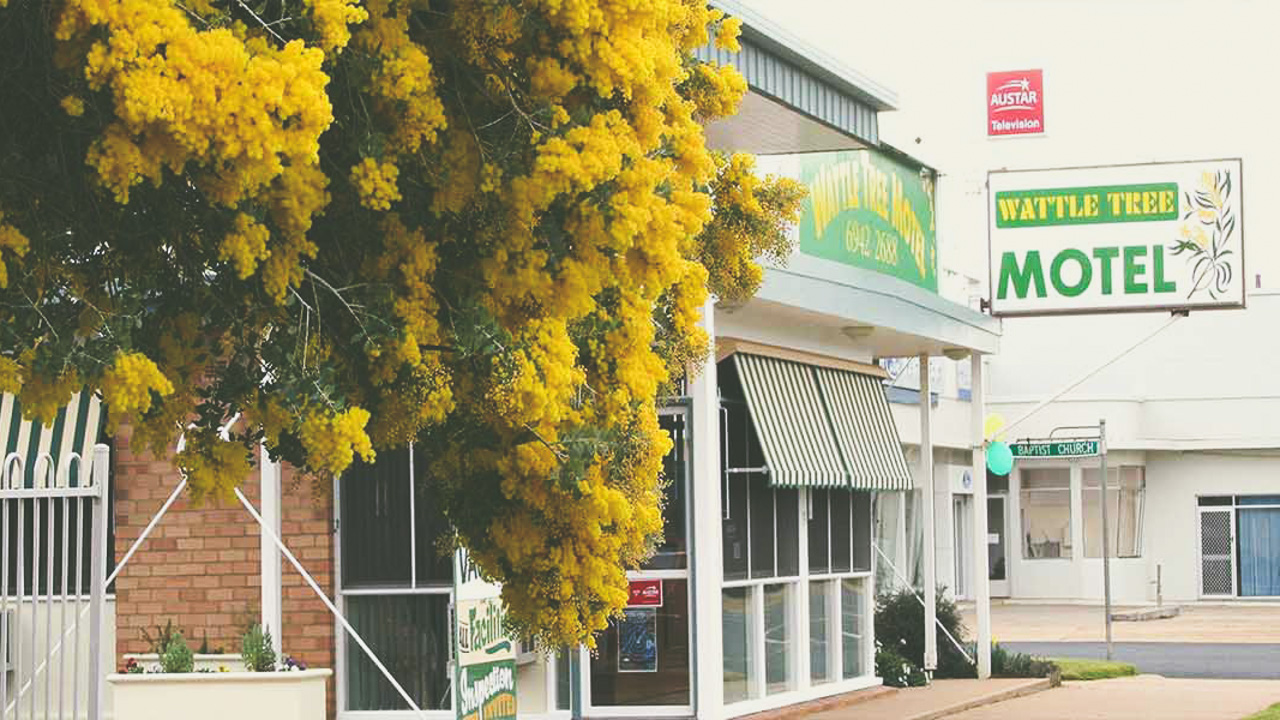 There’s nothing prettier than driving in to Coota when the famous Cootamundra wattle is in bloom. It has a famous song written about it by John Williamson. The branches of the tree are covered in clusters of bright yellow, small, rounded flowers held in late winter through early spring. The Cootamundra wattle is a shrub or tree in the genus acacia baileyana. Its scientific name honors botanist Frederick Manson Bailey. In New South Wales, it is native to four districts, including Temora, Cootamundra, Stockinbingal and Bethungra.

Hey it’s July and the winter sun is shining
And the Cootamundra wattle is my friend
For all at once my childhood never left me
‘Cause wattle blossoms bring it back again. 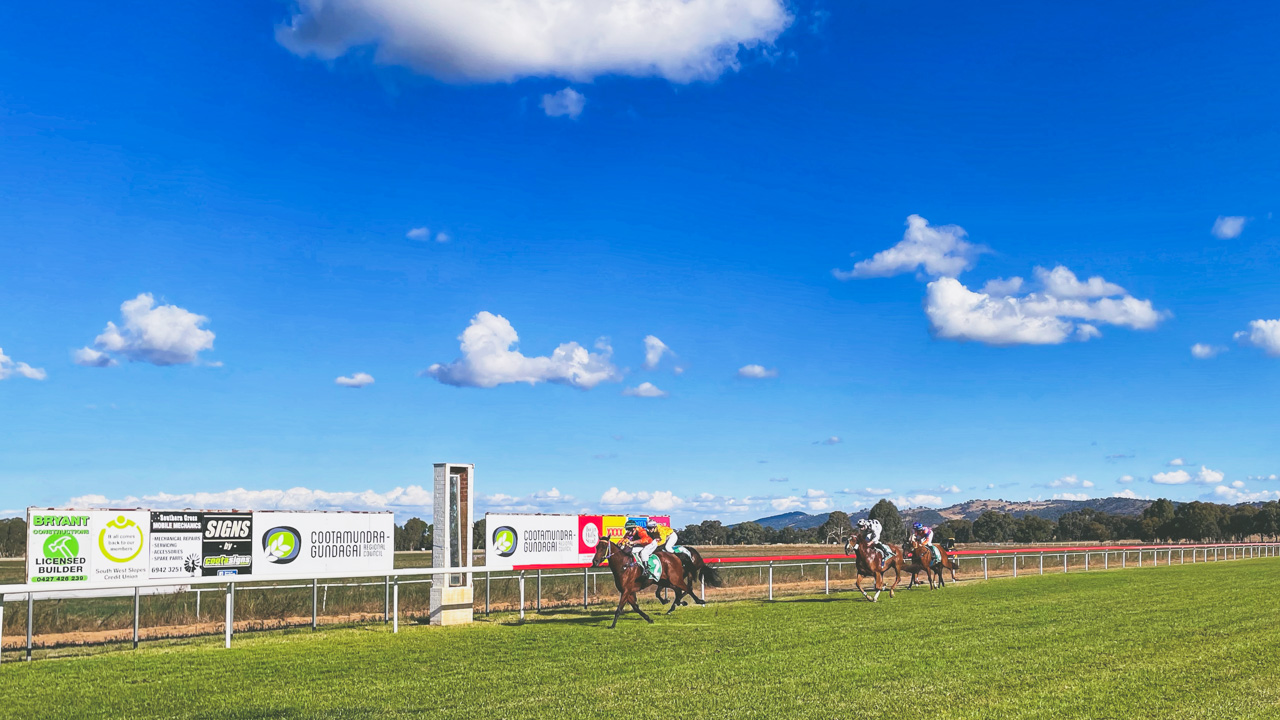 The grandstand is full of racegoers at the annual Cootamundra Picnic Races. It’s a fun day out for the whole family. Held in April at the Cootamundra Race Course just outside of Coota. Local bands play live music and they have full bar facilities. There is always food available, sausage sizzle, burgers and there are usually a couple of food trucks with coffee and pizza. It’s always a lively event and the racing is always great. They run fashions in the field in a big range of categories. Check their Facebook Page for details of the next event.

When the Main South Line was extended from Harden, the Cootamundra Railway Station opened on the 1st of November 1877. On April 15th of the following year, less than 5 months later, the line was again extended to Bethungra. When the Tumut and Kunama line opened up as far as Gundagai on June 1st 1886 Cootamundra became a major junction station.

During 1901 an island platform was built, which has since been closed. The line through Coota was duplicated 40 years later in 1943. It resulted in the building of the largest overhead gantry in the Southern Hemisphere. Now relocated it still stands proudly within the station grounds.

Coota Railway Station is a large complex with a number of buildings and a unique first class terminal building. Both the towns landscape and the development of the rail network are reflected in this work. Nearly the entire length of the town’s eastern boundary is dedicated to the rail yard. It’s an integral part of the town’s development. There is great detail in both the building and the cast iron columns and brackets of the canopy on the Station building and major platform.

A heritage listing of Cootamundra Railway Station was placed on the NSW Heritage Register on the 2nd of April 1999. 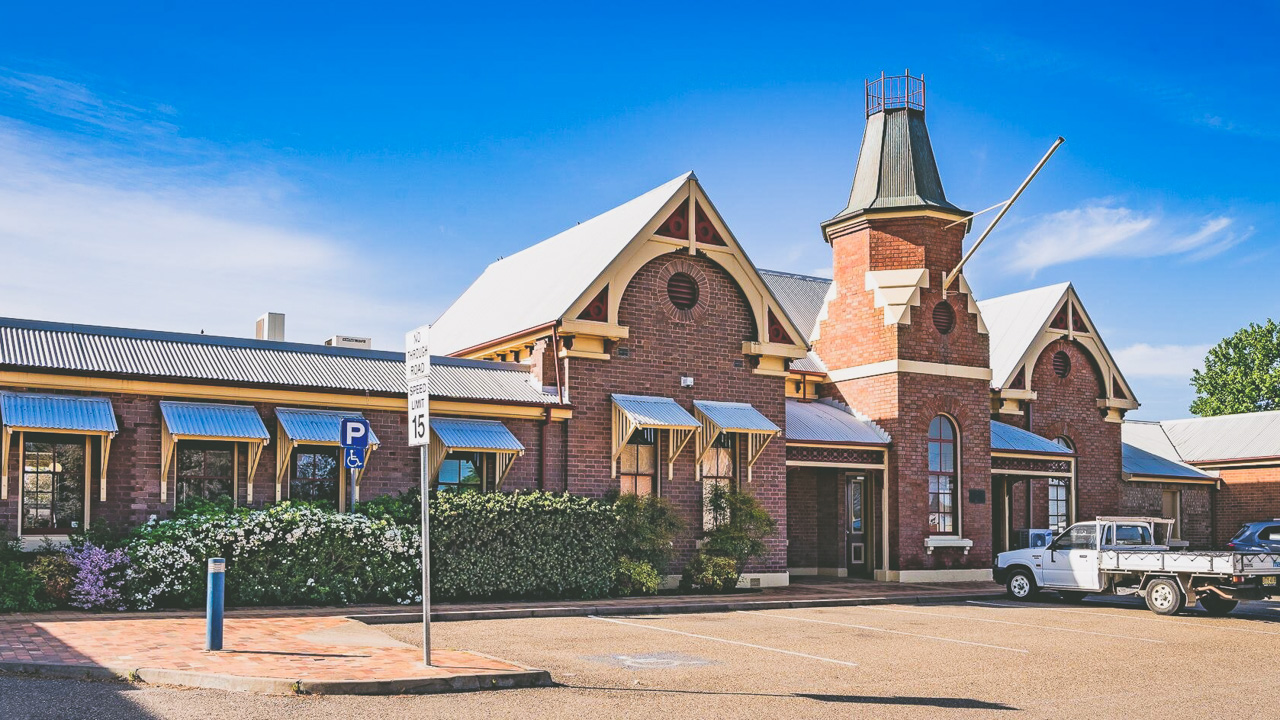 In addition to being neat and spacious Cootamundra Caravan Park is easily accessible from town but sits off the main road. In fact you can walk to everywhere within Cootamundra from the caravan within five or ten minutes. The Cootamundra RSL Club is about two minutes walk from the caravan park. The RSL has a very good bistro and meals are both cheap and generous.

Cootamundra is situated on the Olympic Highway, not very far off the Hume Highway. It’s easily accessible when travelling between Sydney and Melbourne. It makes a great stop to break up your journey.