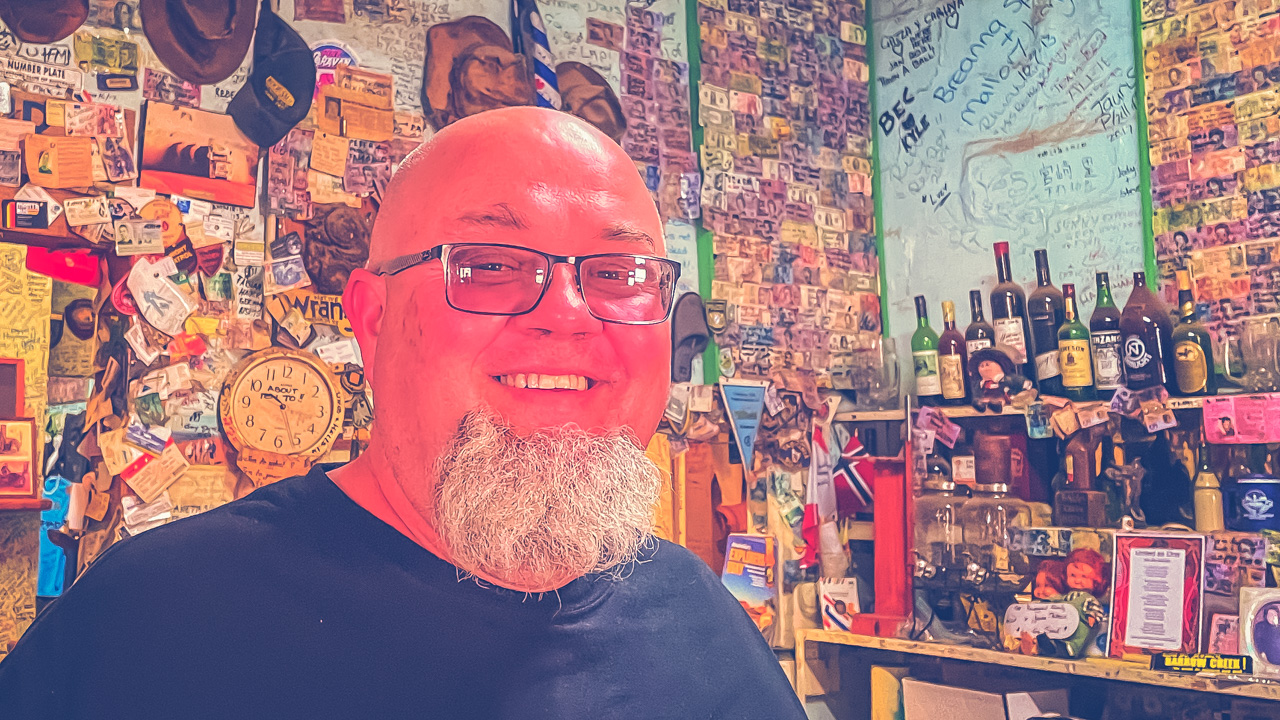 Barrow Creek Hotel is more than a bit run down these days but it certainly didn’t detract from the experience. In fact I reckon it probably added to it. If you are looking for a gourmet lunch and beer on tap then give it a miss. If on the other hand you are looking for a real experience in a struggling old pub then call in. Meals aren’t available at the moment due to the cook doing a runner and replacement staff aren’t exactly beating a path to the door. You do have your choice of microwaved Mrs Macs pies and sausage rolls. Depending upon when the supply truck last called through. As for beer we watched as old mate undid the two padlocks on the fridge door and gazed in wonderment ant the vast selection of – yeah well we had a XXXX Gold! It was nice and cold though so it had that going for it at least. What exactly goes down in a place where the publican has to padlock the beer fridge during open hours does get you thinking. 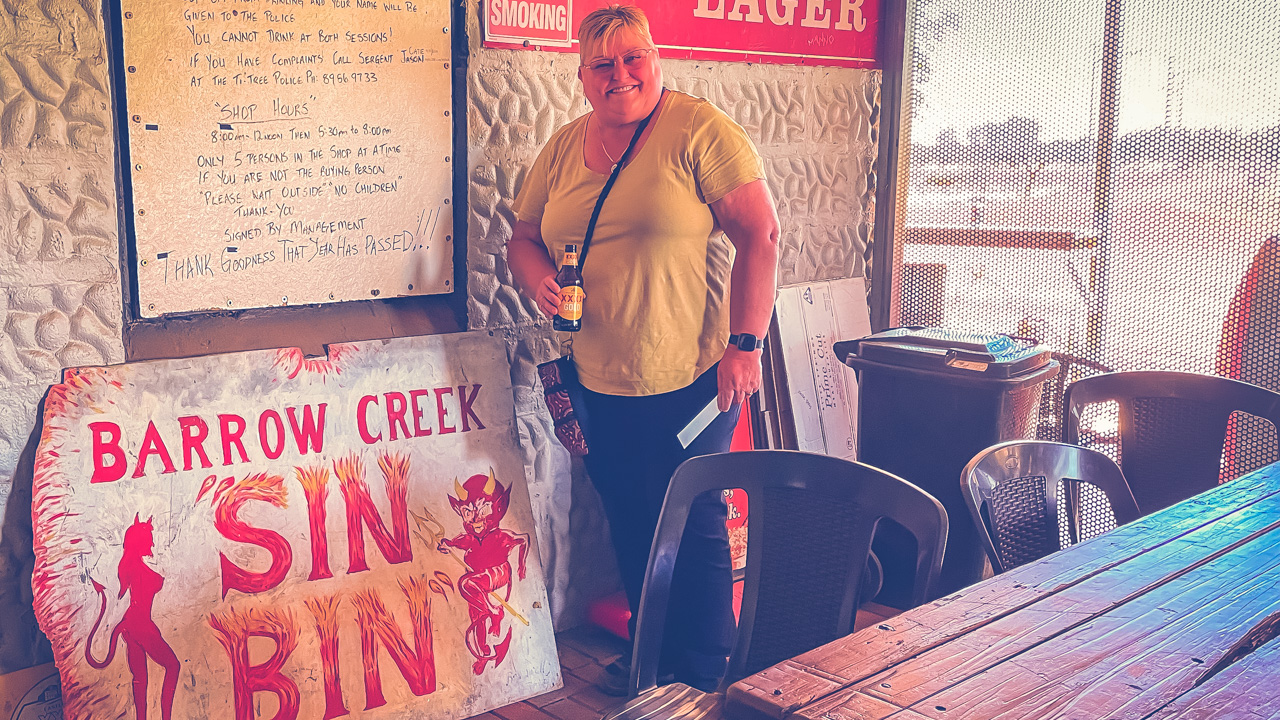 Fuel is available at Barrow Creek and the price given the current climate was not too bad. And to add to the whole yesteryear thing they have going on old mate the publican also doubles as the fuel attendant. After filling up he wanders out to the pump to check out how much you’ve used. None of that modern day straight to the console swipe your card and you’re on your way at Barrow Creek Hotel! I loved it. It’s how things used to be. 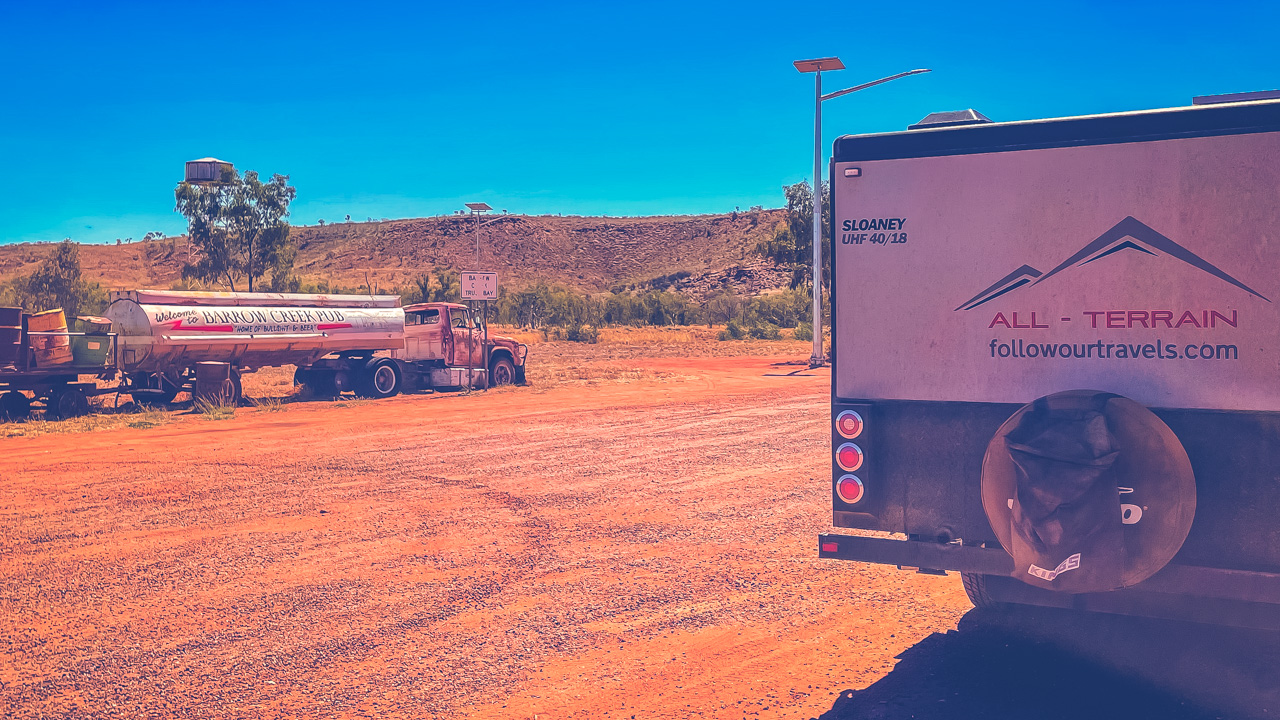 We pulled up stumps for the day and free camped at Matts Quarry a few minutes north of Barrow Creek on the Stuart Highway. Set your trip meter when you leave the hotel and head north. At the 1.2km mark look to your right and you will see a track heading off in to the scrub. Pull in and the track widens out and branches off in to dozens of good little spots to free camp. 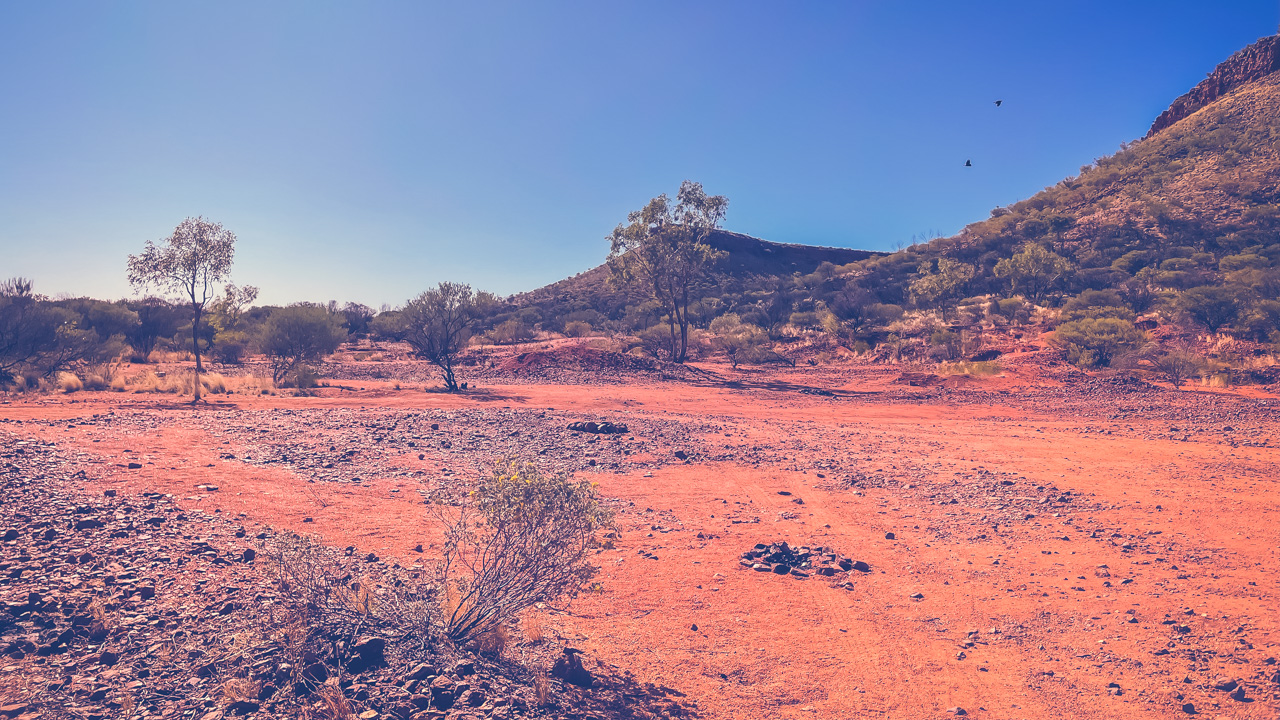 There are no facilities available at Matts Quarry free camp however. No toilets, no showers, no water available however for the princely sum of zero zip nada dollars you get views of the surrounding area that are spectacularly beautiful. If you are looking for Barrow Creek Hotel Free Camping then I recommend Matts Quarry.

A Little Bit About Barrow Creek

With a current population of 11, Barrow Creek is a very small town in the southern Northern Territory. About halfway between Alice Springs and Tennant Creek, it is located on the Stuart Highway, about 280 km north of Alice Springs. The town’s main attraction is its roadhouse/hotel. The creek was named after the then-South Australian parliamentarian John Henry Barrow. His migration to South Australia had taken place in 1853. Kaytetye Aborigines have been living along Barrow Creek for tens of thousands of years. 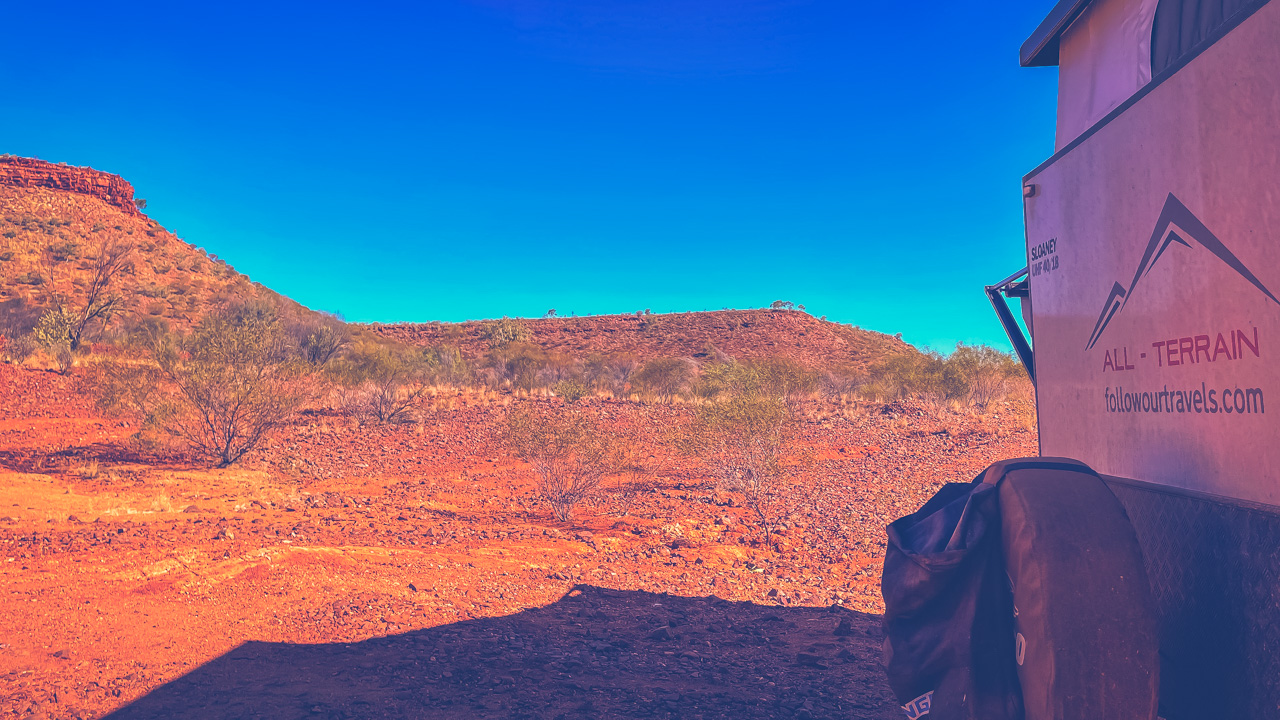 During a trip with his girlfriend Joanne Lees, Peter Falconio disappeared on the Stuart Highway near Barrow Creek in the Northern Territory of Australia on the evening of 14 July 2001.

Following the backpacker murders, the case attracted considerable public and legal attention both domestically and overseas. Falconio was 28 years old when he disappeared. He has never been found, and it is presumed that he is dead. In December 2005, Bradley John Murdoch was found guilty of Falconio’s murder and sentenced to life in prison. 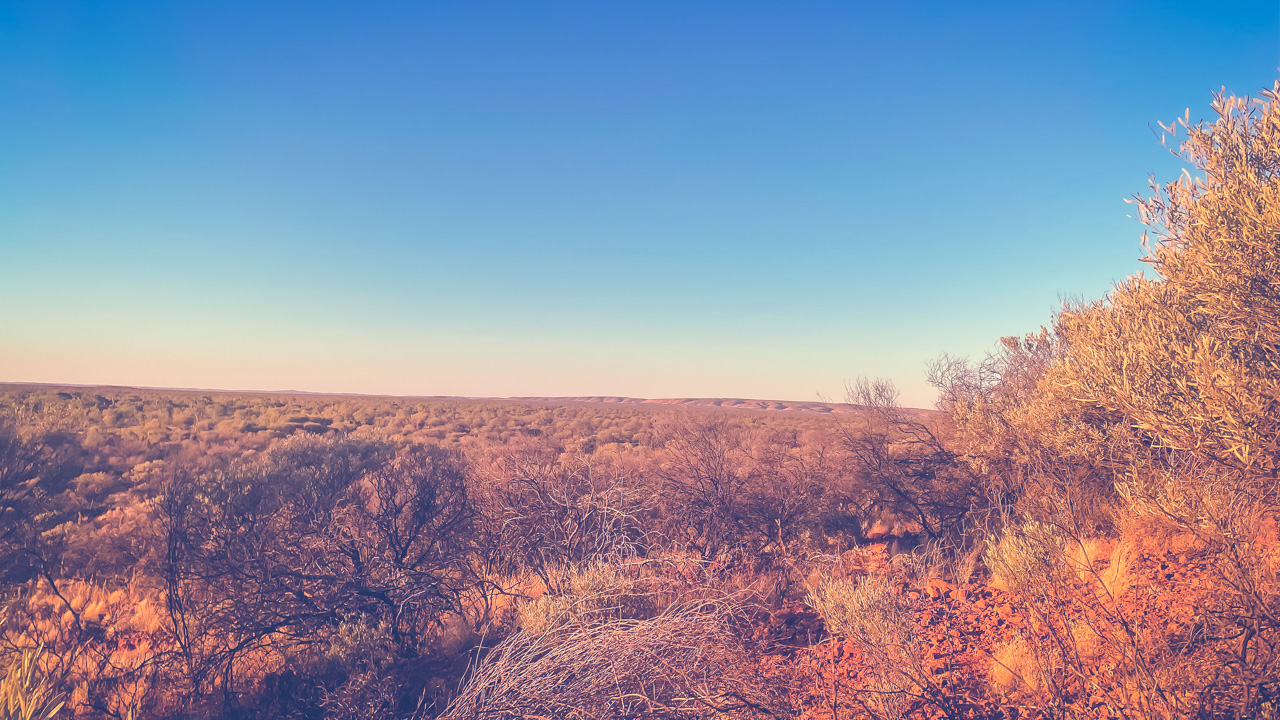