Tibooburra to Cameron Corner via Jump Up Loop Road

Cameron Corner via Jump Up Hills Loop Road 2019 MARS Enthusiasts National Muster. A day trip via the Jump Up Loop Road out of Tibooburra NSW during our recent 2019 National Muster adventure to the Dig Tree and Birdsville. What a drive! The Jump Up Hills Lookout is spectacular – you have to see it to believe it. The drive heads out north from Tibooburra towards the Warri Gate then 15ks out of town you turn left. You can’t miss the sign.

We originally intended travelling out to Cameron Corner and and back via the Main road from Tibooburra. However when we were fuelling up at TJ’s Roadhouse in Tibooburra the lady behind the counter told us that there a nice touring route via the Jump Up Loop Road and she gave us a mud map. After a discussion outside we all agreed that it was worth a crack so off we went. What a fantastic decision!

We headed out to the north and stopped at the Pioneer Park to drop our tyre pressures. After that we carried on along the Silver City Highway towards the Warri Gate for about 15 kilometres until we reached the well signposted turnoff.

The Jump Up Loop Road Turnoff

After about an hour or so we came to the lookout. This lookout made the day 100% worthwhile. The views are magnificent. You have to see it to believe it. It’s as dry as a dead dingos’ donger for as far as you can see. And the colours. The colours are spectacular. They range from the whitest of white through to the reddest of red with all shades of brown and purple in between. It’s truly amazing. If you look closely you can see small areas where it looks like some mining has occurred in the past on a small scale. I am guessing it might have been done for the collection of clay to use for some of the road construction. 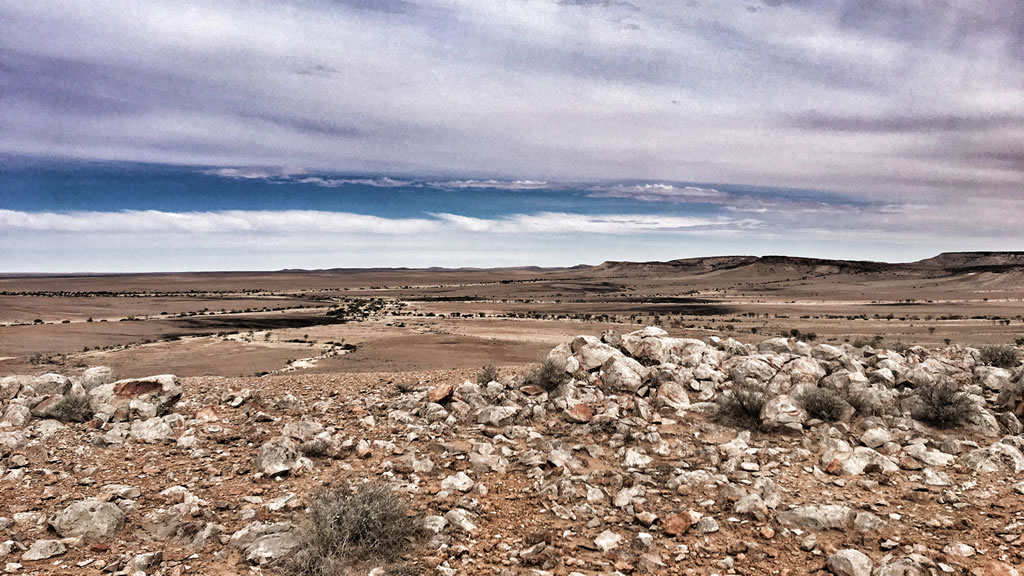 After the lookout we continued on along the Middle Road towards Cameron Corner. We passed a few old falling down homesteads that were pretty cool. I’d love to come back some time and camp near one of the old homesteads and have an explore. Middle Road turned in to a bit of a corrugated goat track in a few places so we just took our time and muddled along. A few vehicles picked up a bit of damage in this section. Nothing major just things rattling loose so as a result made a few short stops for repairs.

Eventually we got on to Cameron Corner Road and followed it in to Cameron Corner. The main road is in a bit better condition but it’s still a lot of fun to drive. In sections it traverses flood plains where you can see to the horizon and in other parts it is sand dune country and goes up, down, over and around sand dunes. It keeps you on your toes but it’s well worth the adventure.

We all arrived safely at Cameron Corner and went in to the store for a look around and to have some late lunch. The store is a great old place and very welcome to arrive at out in the middle of nowhere. They server great food and have a small bar for drinks. The inside is worth stopping and having a good look at. There are probably hundreds of caps and hats stuck to the ceiling, and stickers all over the walls from past adventurers and groups. 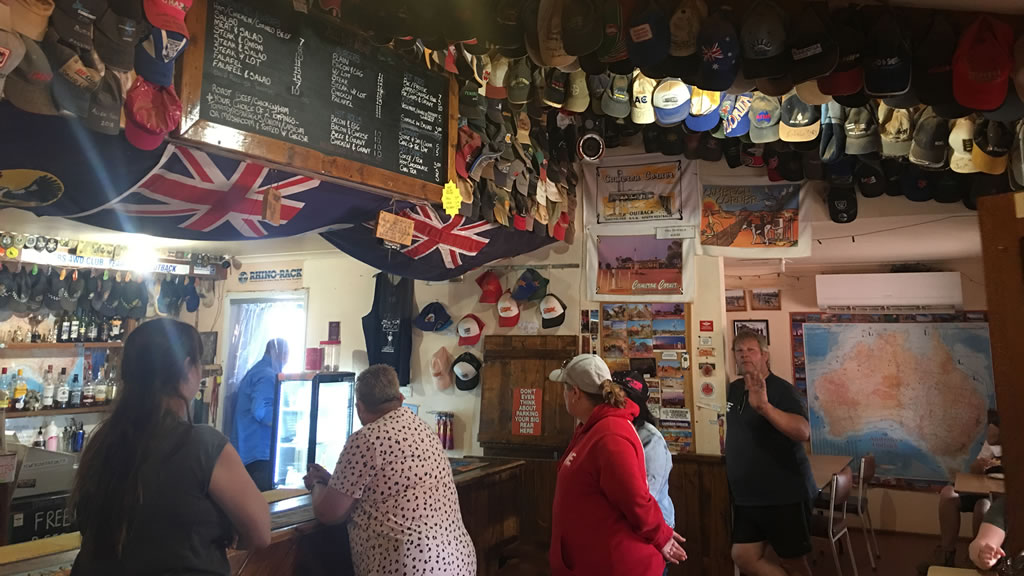 Inside the Cameron Corner Store

The Corner Store can also sort you out with basic grocery needs and fuel. You can hire some golf clubs and have a round of “Tri-State Golf” at the makeshift 9 hole course. You can also camp at Cameron Corner. They have powered sites, unpowered sites and bush camping available. We’ve camped here before and the views are spectacular and the showers are nice and hot and the toilets are clean. Not much more you need is there? 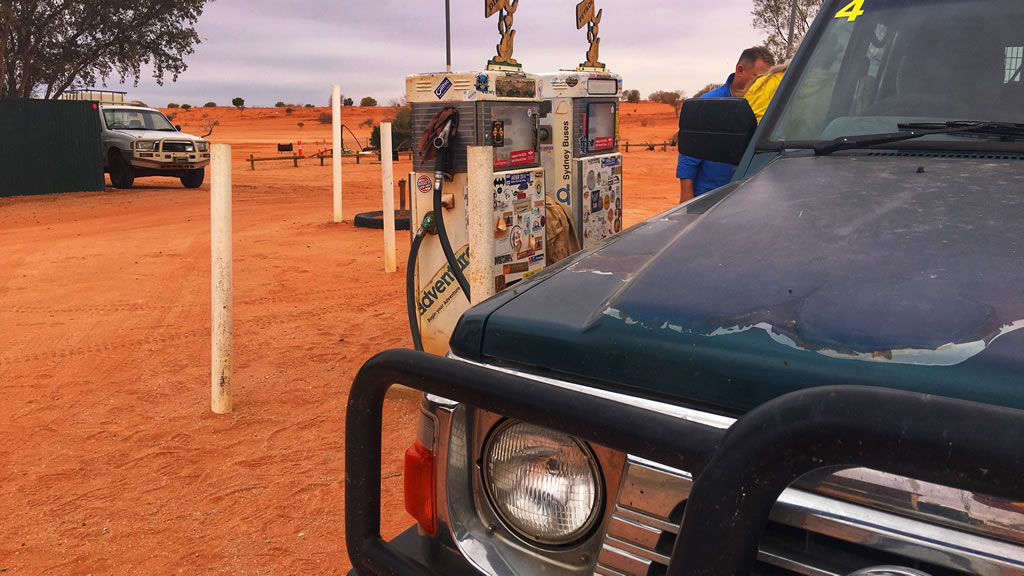 Fuel Pumps at Cameron Corner – Are They The Most Iconic Fuel Pumps In Australia?

All of us headed across to have a look at the corner marker and to check out the dingo fence. The corner marker really is a special thing. I first remember seeing it on a Leyland Brothers episode about 40 years ago. That very episode is one of the things that made me want to get out and travel the bush so the marker is even more significant to me in particular! 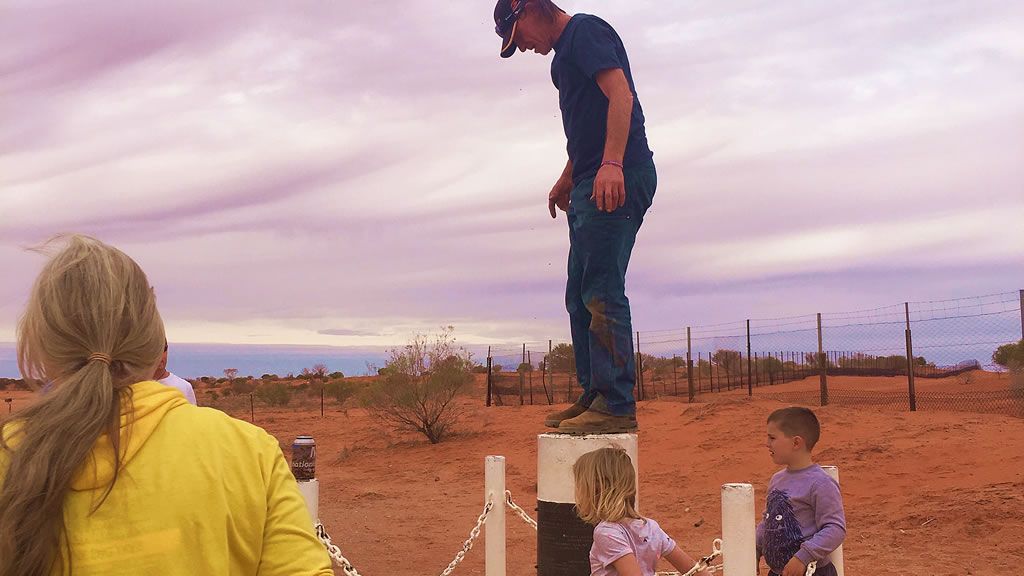 One Of The Crew On Top Of The Corner Marker

After a bit of time at the marker we all piled back in to our vehicles and headed back to Tibooburra along the main road. It was a fun drive back, we saw plenty of kangaroos along the side of the road and a few crossed the road in front of us so that kept us on the lookout. 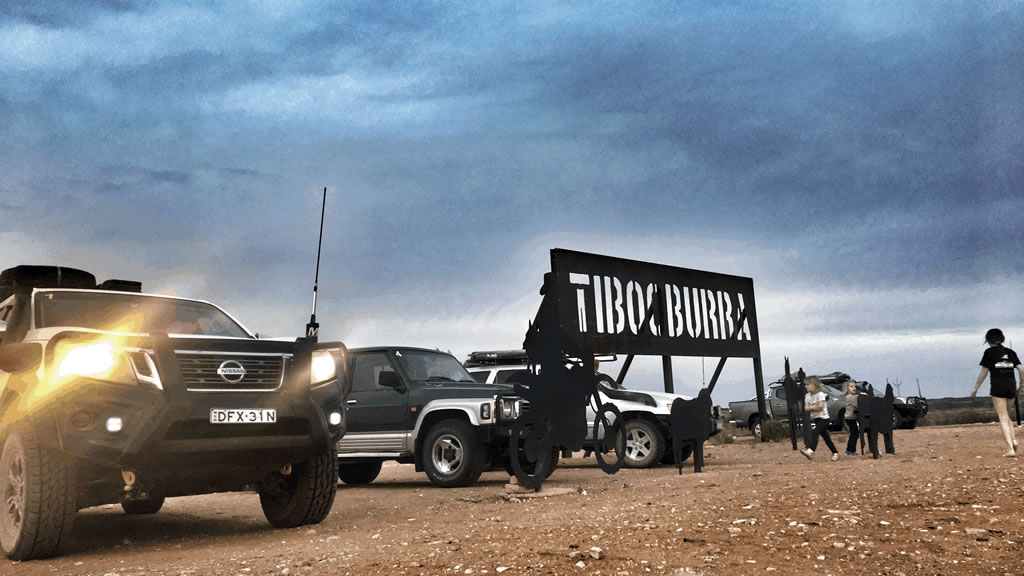 The roads were of varying quality, all dirt and gravel. Some of them were a bit sandy, some were pretty corrugated and some had some fairly large rocks on them that had to be avoided. All up though the roads were pretty good.

All up it was a great day out with a great bunch of people. I really wish we could do it all again tomorrow. If you ever get the chance to do this drive, make sure your vehicle is prepared for the corrugated parts and have a crack. You won’t regret doing it. It’s been one of the most fun and memorable things I have done in a long time.

The Jump Up Loop Road and Middle Roads

The Jump Up Loop Road and Middle Roads are a bit on the rough side in parts and we all copped a few small damages here and there but we made it through safely. If you’re up for a bit of adventure and some incredible scenery it’s definitely worth the effort.

The Jump-up Loop Road takes you through some impressive and harsh country. Types of terrain include desert areas, gibber rock plains and red dune country. The loop is dotted with the occasional tree and small rocky gorge. In some places landscape looks like the surface of the moon. Not that we’ve been to the moon but you know what I mean!

Be warned that this is a remote and harsh area and you will need to be well-prepared with food, water and communication just in case. There is no phone reception here. It’s best to advise someone of your travels and for safety travel with at least one other vehicle. It’s inadvisable to travel this road during the hotter months of the year as temperatures can skyrocket north of 45 degrees for days on end.

Before leaving Tibooburra make sure you have fuelled up your vehicle as there is no fuel available until you reach Cameron Corner about 150km away. Also air down your vehicles tyres as the roads are corrugated in parts. 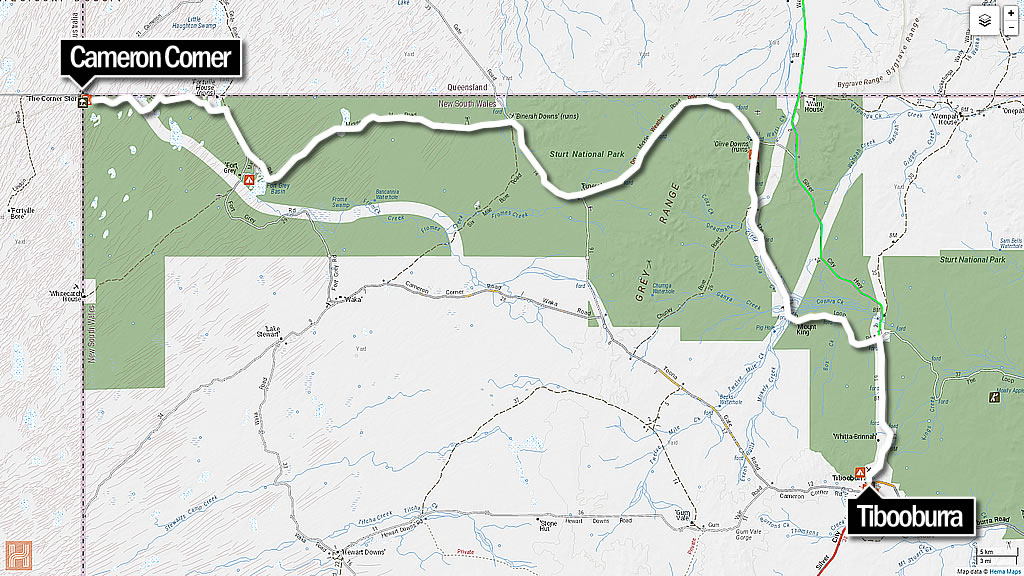 All up the drive took our group about four and a half hours from the Pioneer Park in Tibooburra to the Cameron Corner store. This included stopping in at the Jump Up Hills lookout and quite a few short stops to repair minor battle damage to our vehicles.

If You Need a Map

Make sure your vehicle and in particular your tyres are in good condition before attempting this route as it very corrugated and stony in parts. Also go all over everything that is bolted to your car and make 100% certain nuts are done up tight and preferable they have spring washers, Loctite or Nyloc nuts fitted. Examples of the damage we had on the trip are listed below.

Sturt National Park encompasses a huge and arid landscape of space and solitude. Starting with the Strezlecki desert rolling red sand dunes to flat topped mesas and 450 million year old granite tors near Tibooburra. A visit to this outback park is genuinely a once in a lifetime experience for anyone who goes there.

A self guided drives or guided tour with one of the tour operators that visit the park is a great way to explore what the park has to offer. For close up views of the landscape go on the short loop walks at Fort Grey or Dead Horse Gully. If you have limited time and can only do one walk check out Mount Wood hills for a walk to the summit. Stunning views of this spectacular landscape make it more than worth your while.

Visit the historic Dingo Fence that runs east to south-west along the eastern third of Australia and along the western and northern boundary of Sturt National Park. The Dingo Fence was originally built in the 1880’s to keep dingoes away from sheep in the southern part of the country. It’s 5,614km long making it the world’s longest fence.

There are four campgrounds in Sturt National Park. They all have sites suitable for caravans and camper trailers as well as the usual barbecue and picnic facilities. Sometimes you can even be lucky enough to have the campground all to yourself although you’ll probably still have share the space with some of the parks’ many kangaroos and birdlife.

The Jump Ups are ancient landforms. The Jump-Ups are the remains of an ancient mountain range that has been eroded down over millions of years leaving a 150m plateau (Mesa) and the granite strewn plains which form the catchment of Connia Creek. Connia Creek follows south-east into Twelve Mile Creek.

Charles Sturt on his expedition to find the Australias’ “inland sea” (how’d that go?) was the first European to explore the area now known as “Corner Country”.
About twenty years later the “corner” was named after John Cameron who successfully led a party to survey the NSW and Qld borders between 1879 and 1881. On arrival atthe intersection of the South Australian border in September 1880 put a wooden post in. The poost was marked “LAT 29” and “Cameron”. This post can be viewed at the National Park & Wildlife Office in Tibooburra. 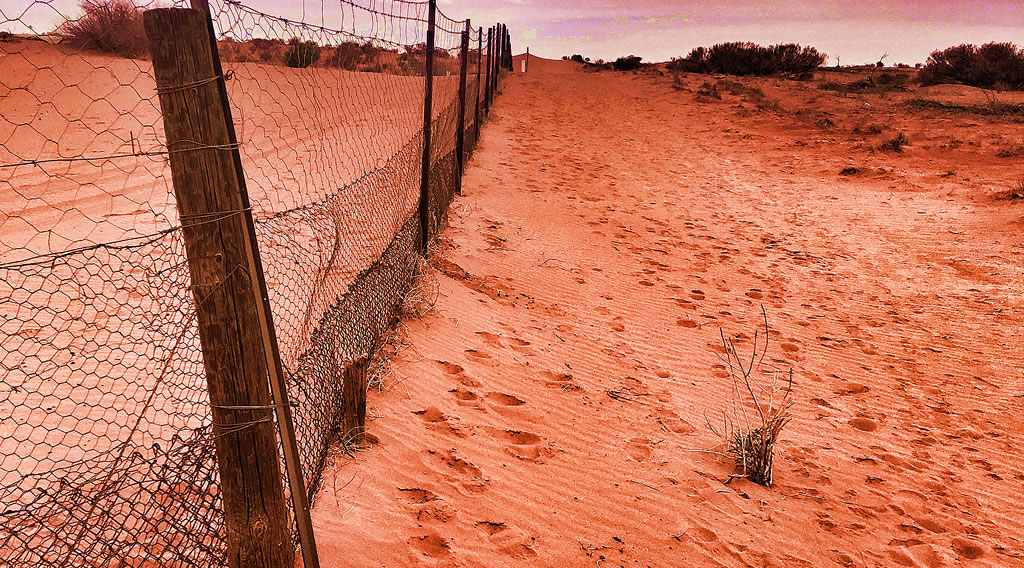