We left Tibooburra early and headed to Cameron Corner. It was a great drive. It took us about three hours including a few stops for photos. The road condition was pretty good. Lots of rocks. A few bulldust holes and some stretches of sandy stuff plus a couple of corrugated bits but overall good. 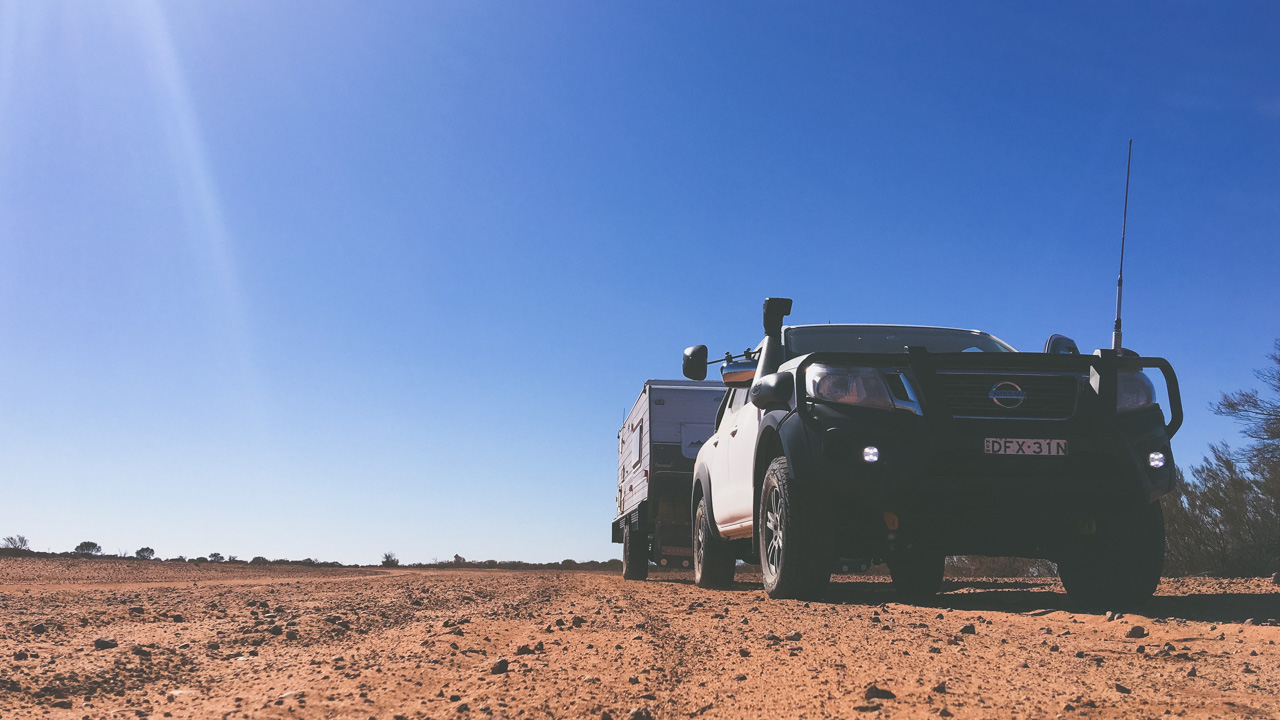 On The Road To Cameron Corner

We drove past a few nice looking National Parks that we’ll go in to next time we are out this way without the dog. A couple of them look like great places to camp.

Cameron Corner itself was much more than what I thought it would be. I wasn’t expecting to see the dingo fence 50 metres behind the corner marker. It was a cool thing to see. We camped at Camerons Corner for the night. I think the camp fees for the night were only $20. Cameron Corner Store has a pub and they serve meals. We had a couple of nice burgers for lunch and a few beers. 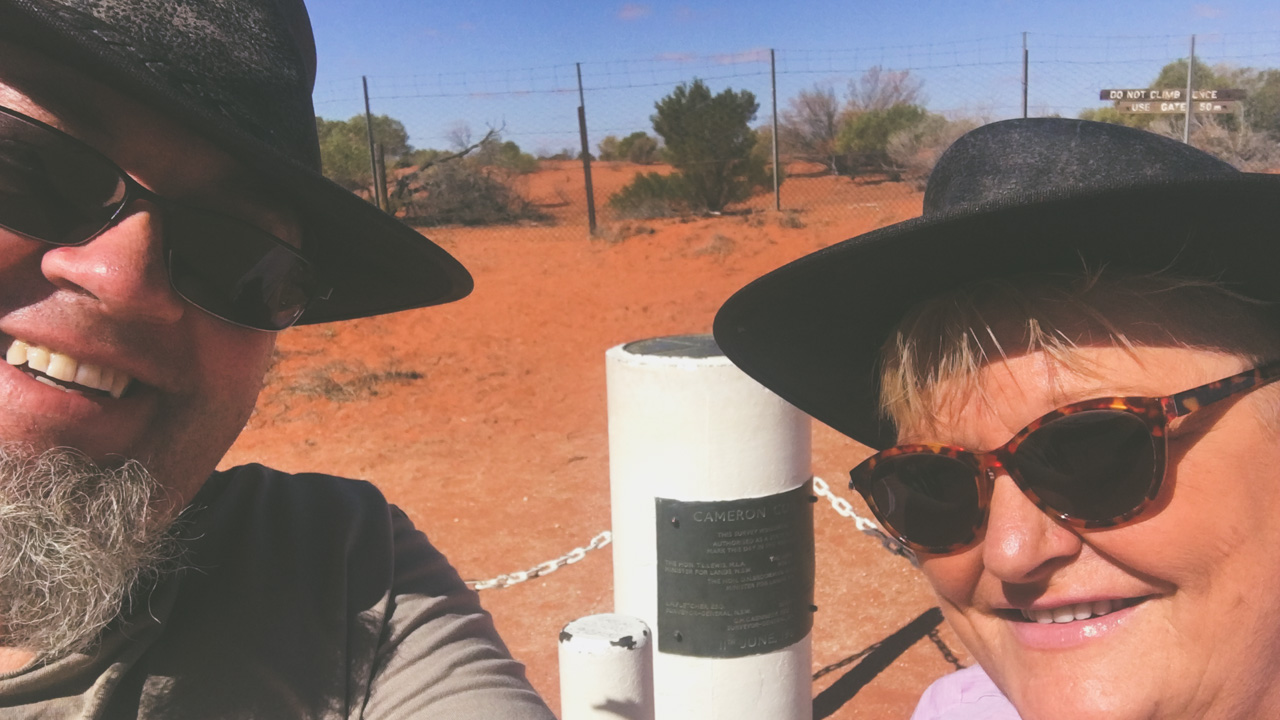 David And Amanda At Cameron Corner

Cameron Corner Store carry a small range of supplies such as frozen bread, frozen milk and ice. Cameron Corner Store has a mechanic available – something you might need out there. They have fuel available but be warned fuel at Cameron Corner isn’t overly cheap. We filled the ute and jerries with 60 litres of diesel and it cost us $120 at $2 a litre. Considering where the place is and the alternative to no fuel available at the corner is walking I thought it was pretty fair. The campgrounds are spartan but clean and hot showers and toilets are available. All up it’s a comfortable place to spend the night in the middle of nowhere. 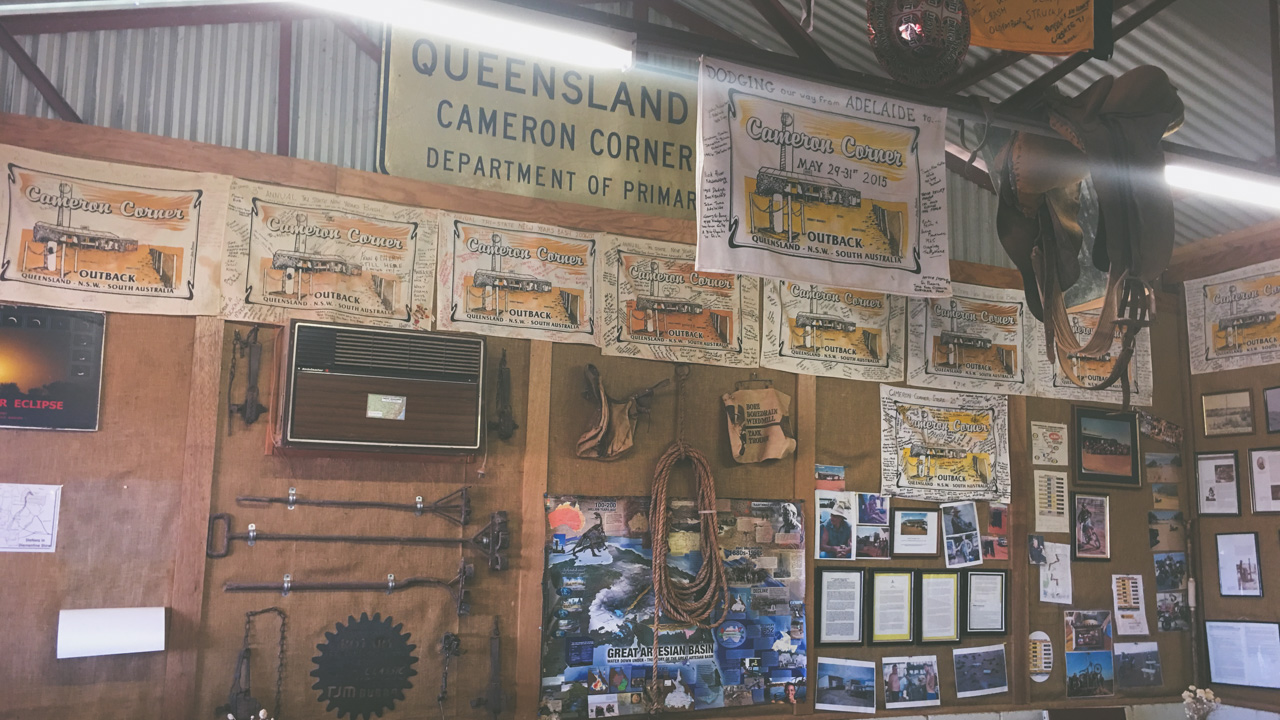 Inside The Camerons Corner Store

Loads of people told us that going to Cameron Corner with a caravan was not a good idea. Being that it’s an old Supreme Getaway it’s totally built for the conditions you encounter out at Cameron Corner and the road out there. I wouldn’t take an onroad caravan out to Cameron Corner but any decent offroad caravan won’t have a problem. Just do the usual preparation. Lower tyre pressure and take it easy. As they are fond of saying in the FaceBook groups “drive to conditions”. Ours was probably the biggest van there and ours is pretty small at 16ft. Most people we saw at the corner were either towing small hybrids or Kimberly Kamper rear folds or Ultimates and Trakvan type things. A lot had swags on the roof. We watched one couple put up an ozTent for the night and pull out the awnings on their car and set up all their gear. Looked like a lot of hard work for one night. 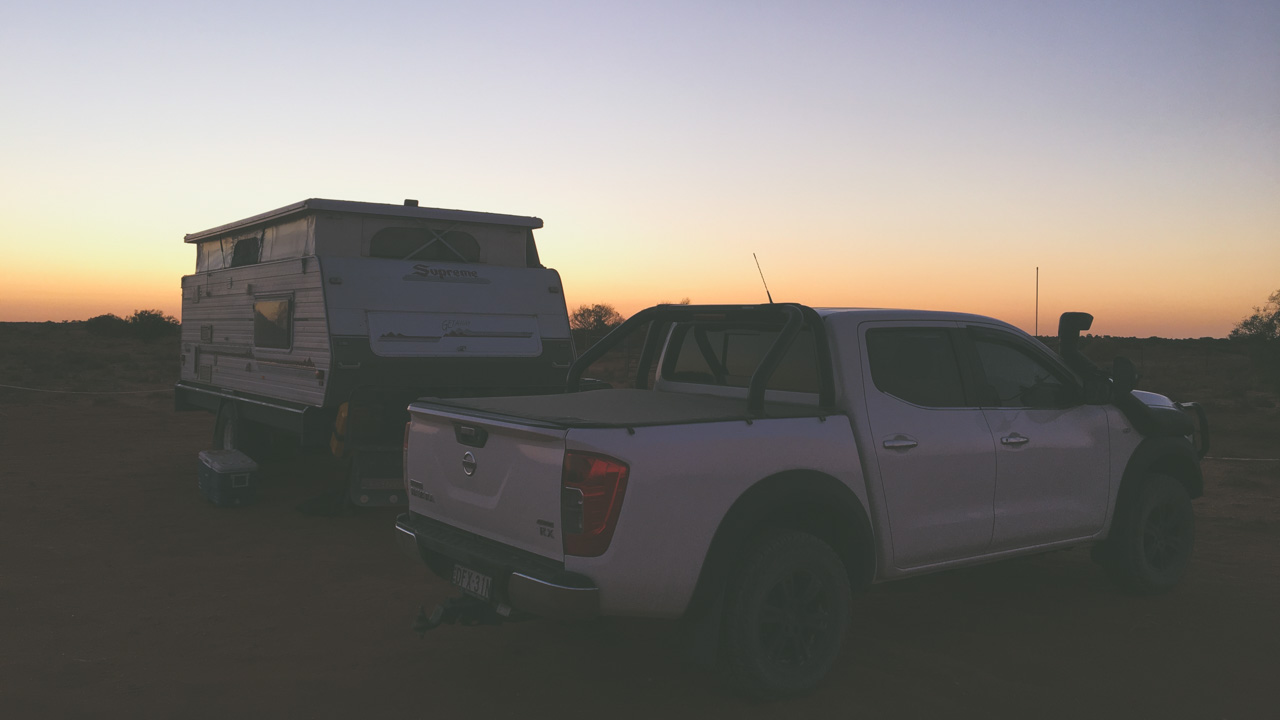 We camped at Cameron Corner in the main area but right down the end near the fence. The cost was only $20 for the night without power but that did include use of the showers and toilets. The showers were great, nice and hot. The facilities are basic but clean. Exactly what we needed. We could have gone down to the bush camp for a small donation to the RFDS (we love the RFDS) but we planned on having a few beers in the pub and preferred being able to walk back to camp. Not a lot of taxis out this way. 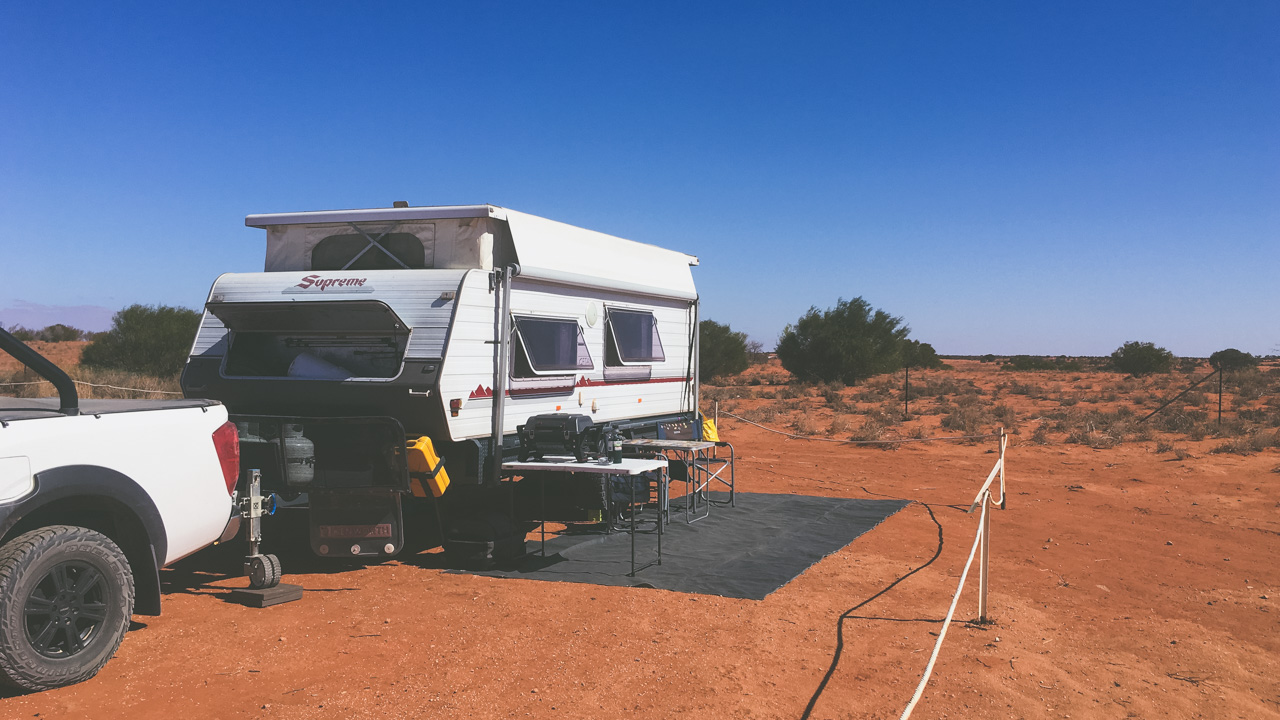 Sitting Around Doing Nothing

We had a look at the corner marker and took some photos then went back for a few more beers. After a few more beers we sat around and played UNO and watched all of the travellers coming in and setting up for the night. At the end of the day we were treated to an absolutely spectacular sunset. The view of the bright red sky as the sun went down over the top of red sand hills was special. Travelling from Tibooburra to Cameron Corner was certainly an experience and is something we will do again and again. 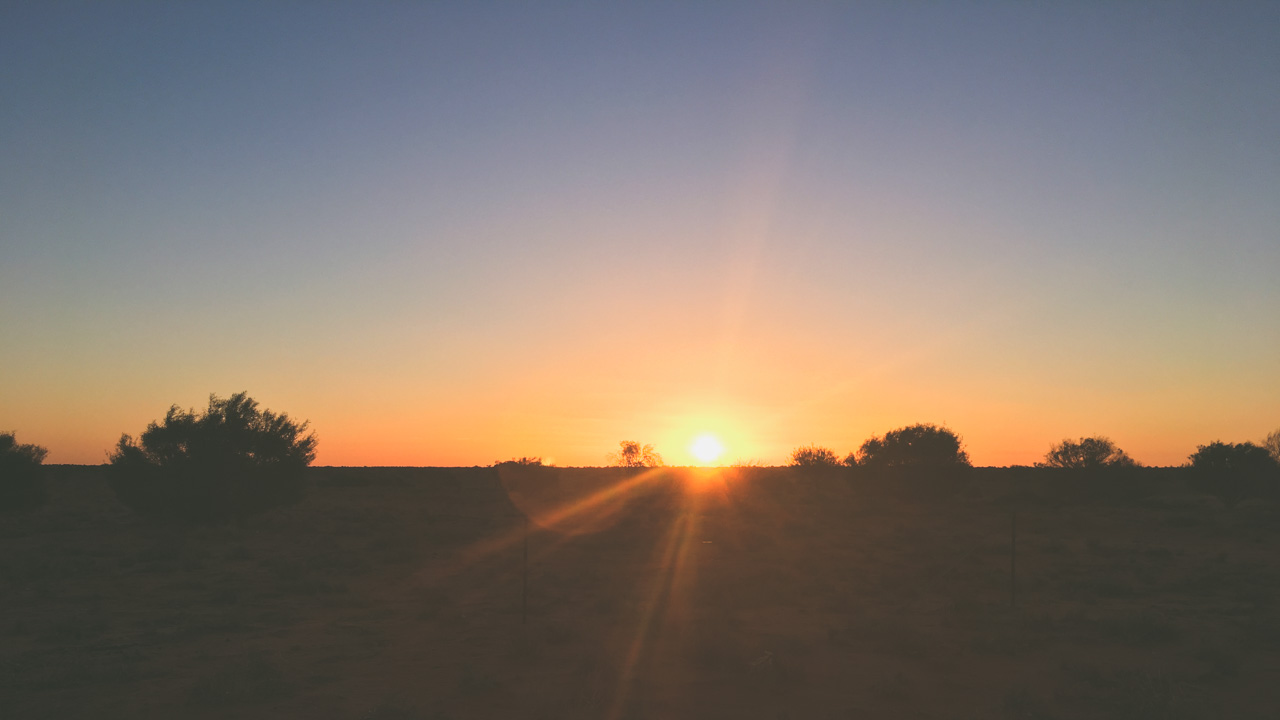