Caravan BBQ Slide Out For Your Tunnel Boot

We turned our caravan tunnel boot in to a BBQ cooking bench with storage box by installing a caravan BBQ slide out. Our Jayco All Terrain was ordered with a slide out kitchen and then found we didn’t use the slide out kitchen except as a bench to sit our Ziggy BBQ on. As a result we had to store the BBQ separately in the caravans front tool box and pull it out and set it up every time we wanted to use it. I found it a pain in the arse as we like to do trips where we are moving every day or two.

So we pulled the slide out kitchen out and sold it. I ordered the biggest caravan BBQ slide out that would fit in the tunnel boot on the awning side from OnTheGoRV. The one I ordered was the DS570 Tunnel Boot Slides. It fits a tunnel boot with an internal opening width of 612mm. They also make slides to suit narrower openings. Additionally we liked the slide out idea we also bought one of their DS265 Tunnel Boot Slides to make a pull out drawer on the other side of the caravan. 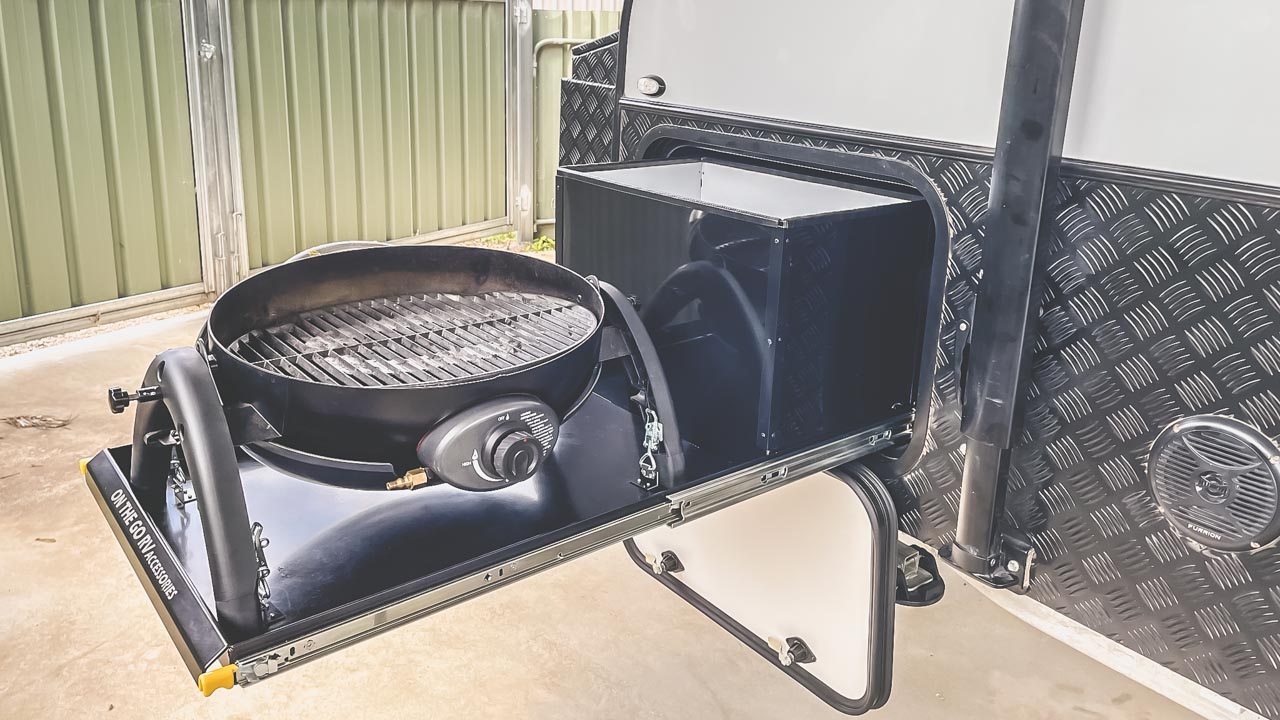 BBQ And Storage Box – Just Slide It Out And I’m Ready To Cook!

After removing the factory installed slide out kitchen and removing all of the plumbing and patching the holes to keep everything waterproof it was time to install the slide. I found it easier to remove the runners to give me access to the mounting holes on the sides. Before removing the deck and runners I measured the distance between the slides and cut some pieces of composite panel offcuts to work as templates/spacers. I drilled pilot holes in the tunnel boot floor and mounted the sides using the provided tec screws. Altogether there are fourteen screws – seven screws each side. Therefore more than enough to secure the weight of the slide and anything you mount to it. 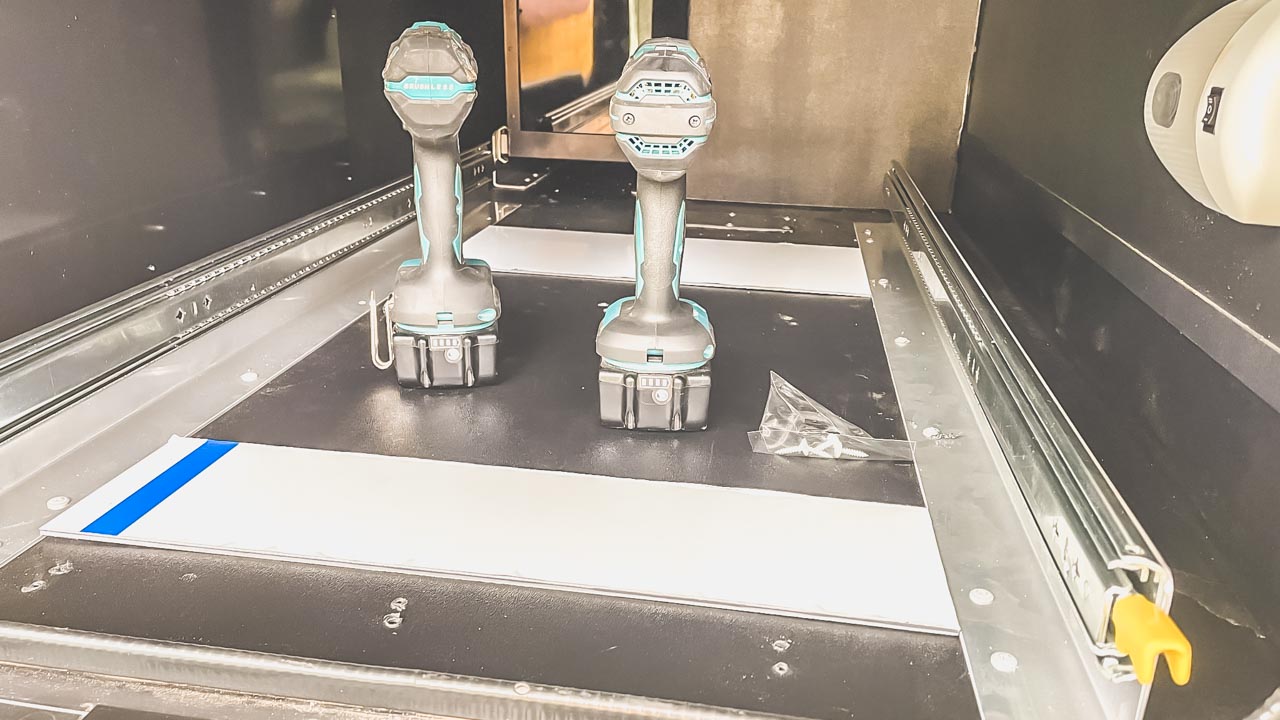 A Few Panel Offcuts Cut To The Correct Length As Spacers

OnTheGoRV make half storage box sides to make a storage box for the caravan BBQ slide out but it was a bit expensive so I made my own out of composite panel. The bonus with making my own was that I could make it to the absolute maximum size that would fit the caravan tunnel boot slide with the BBQ mounted to it. We now have haps of storage for all the BBQ bits and pieces. 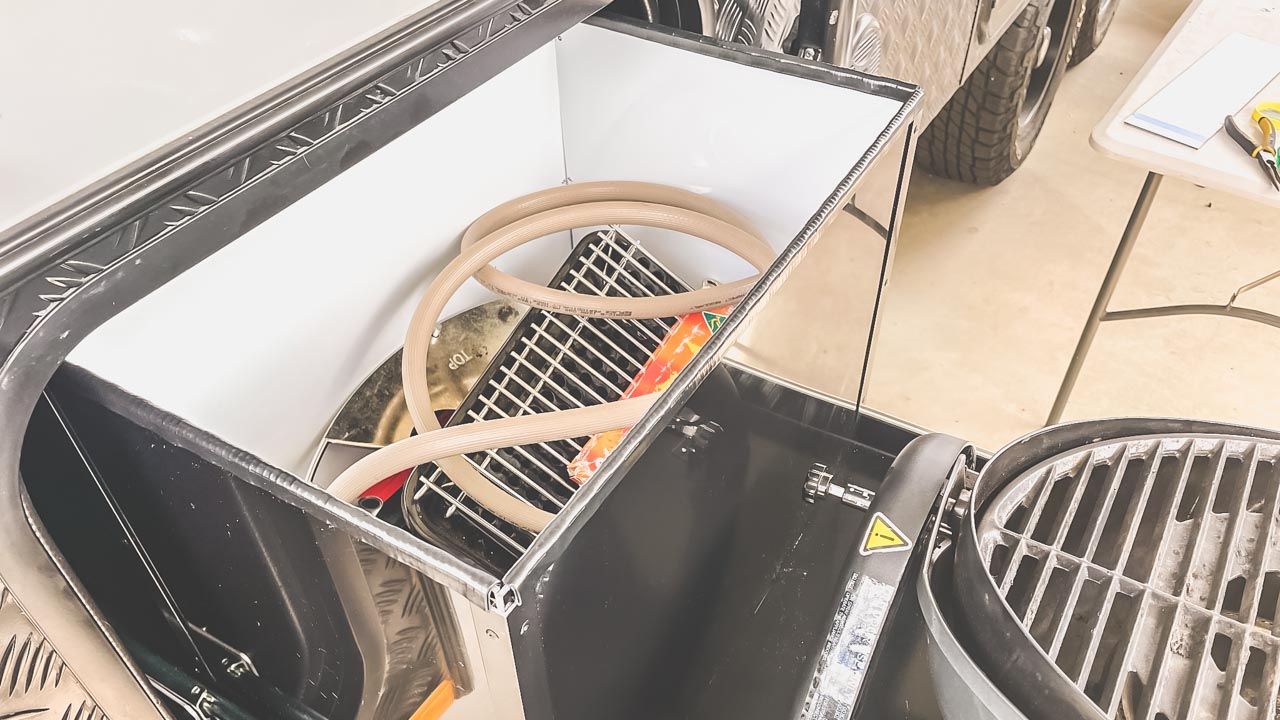 Amanda came up with this idea for fixing the BBQ down. It needed to be easy to remove the BBQ as the ziggy has a little fat container underneath that you need to empty now and then. 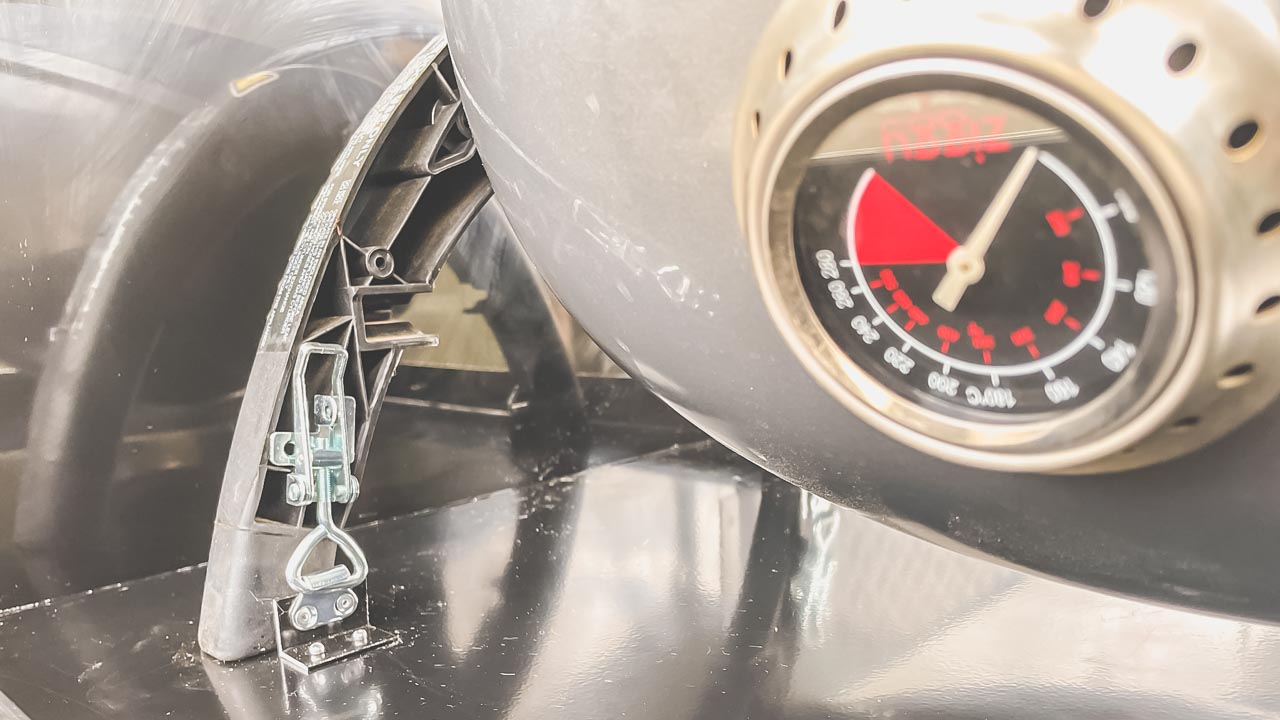 Composite panel. You can get it at Bunnings. Good luck finding where though! we’ve been using it for years and have bought it from three or four different Bunnings and it’s never ever where the phone app says it is. 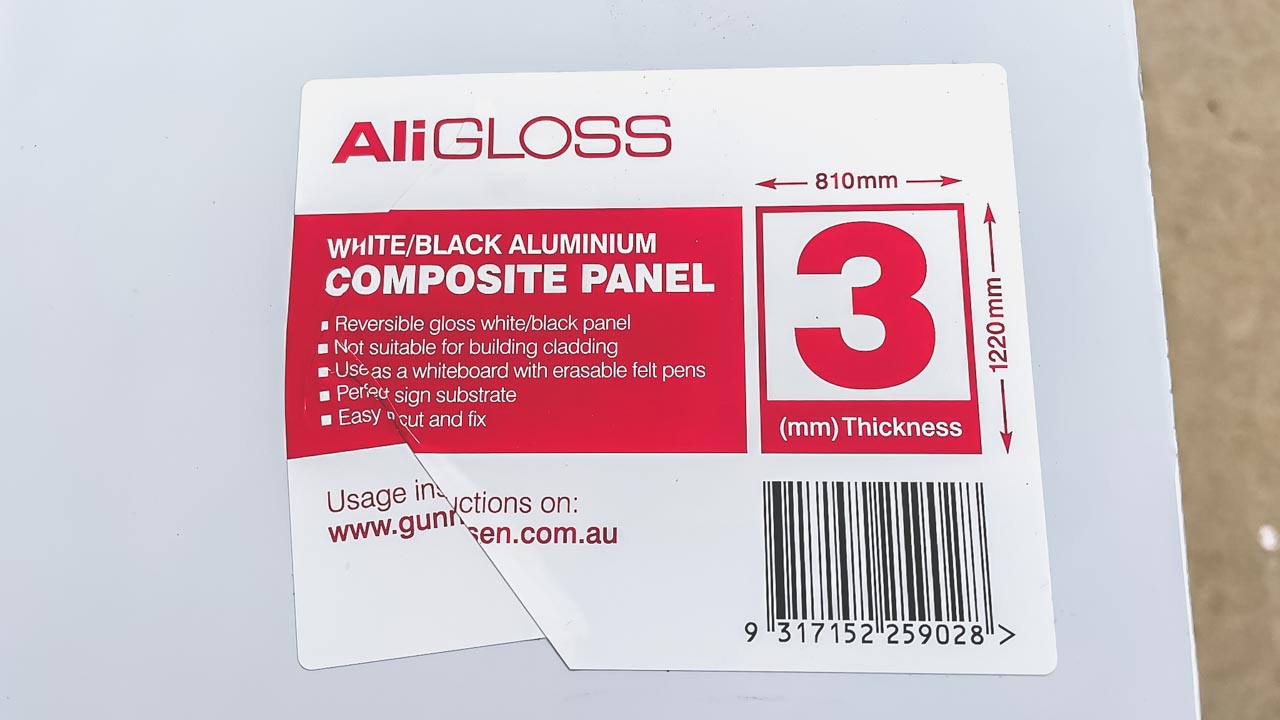 Cutting the composite panel for the sides. It’s easily cut with a Stanley knife – you just need a nice straightedge to run the knife along. 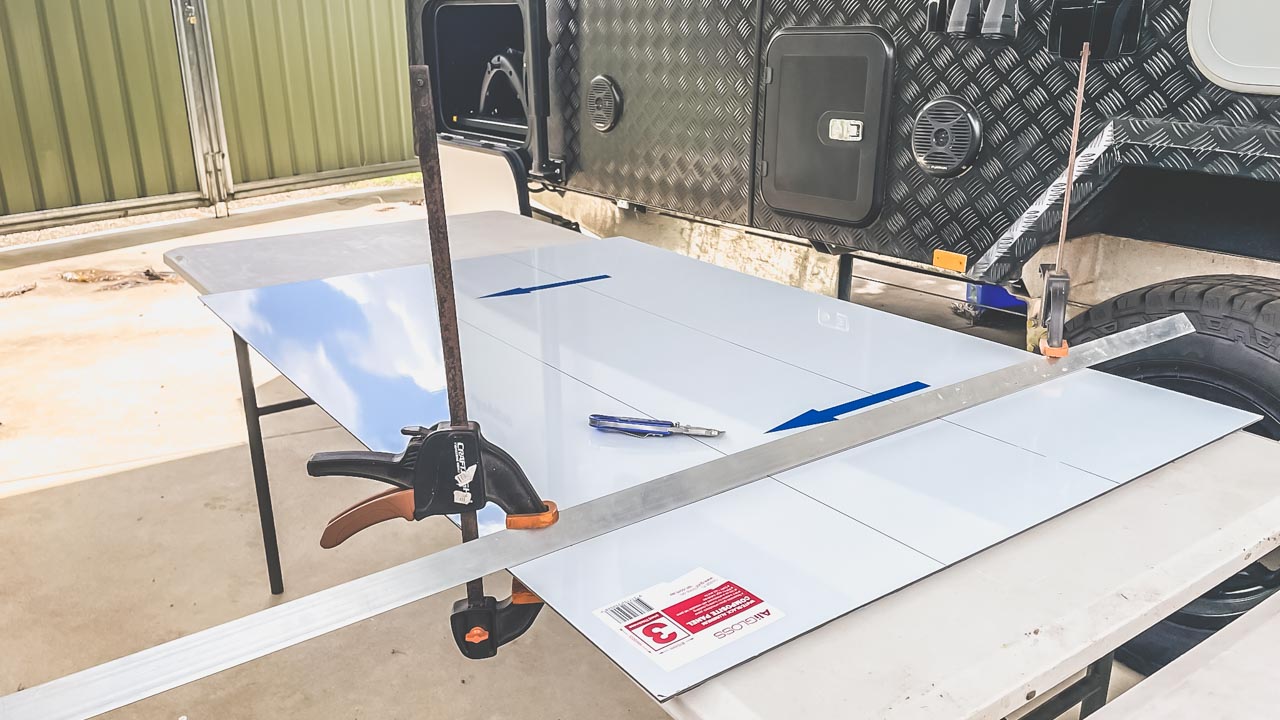 How To Cut Composite Panel

After half a dozen passes with the knife you just snap it over the edge of a table. Fold it back on itself a few times then cut the remaining plastic along the join. The stuff is gloss white on one side and gloss black on the other. It has a white plastic protective film covering when it. 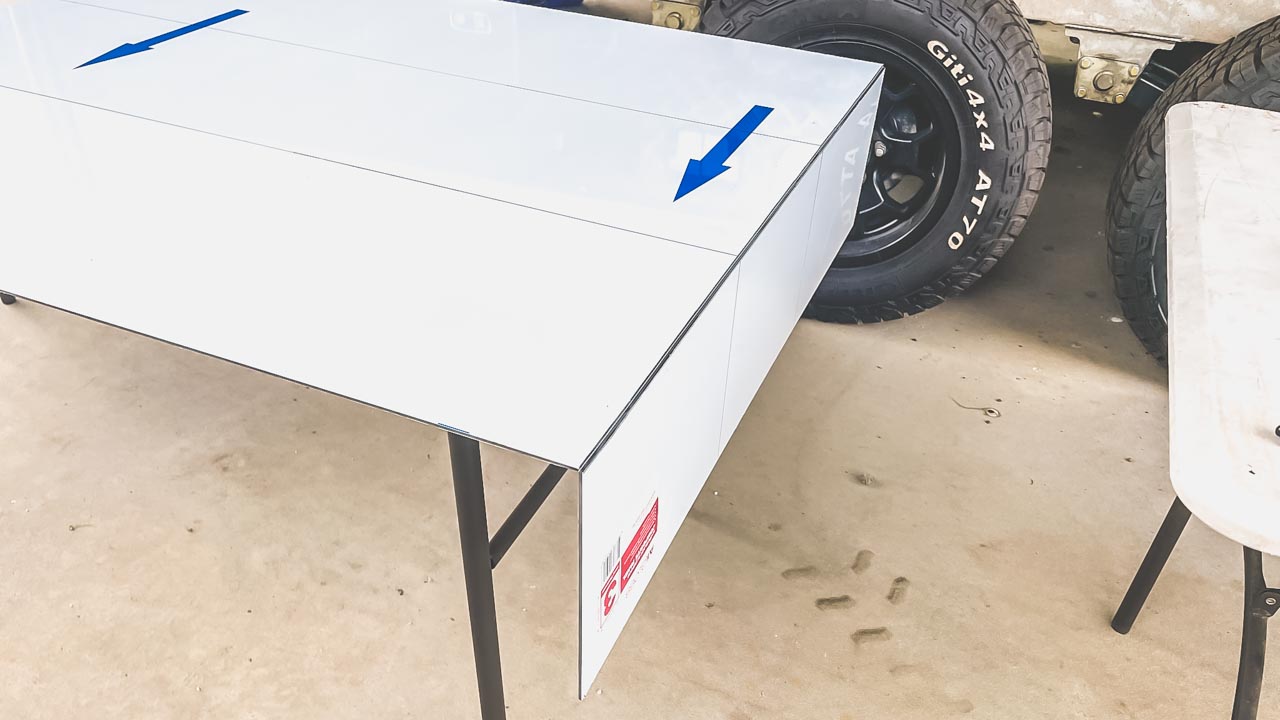 Snap For A Nice Clean Edge

Corners of the boxes are held together with powdercoated black angle aluminium. This Soudal stuff sticks and hold really well. 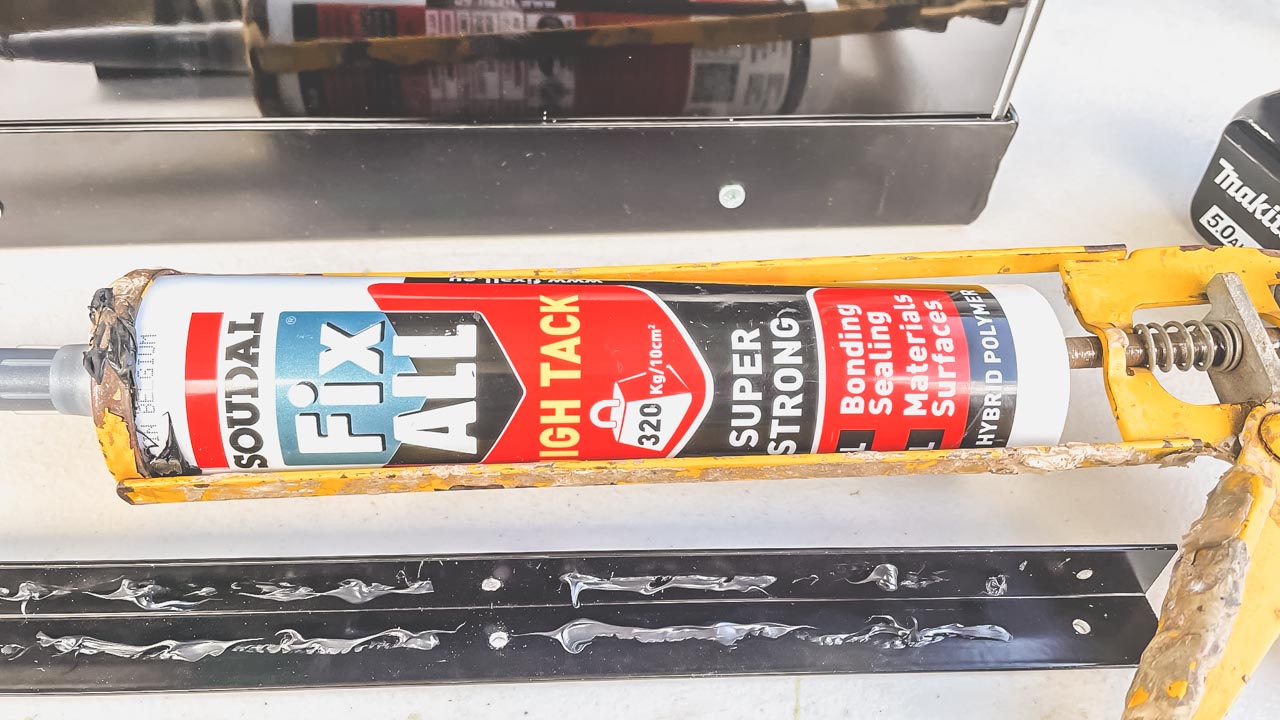 The rivets are really just there to hold the angle until the glue goes off.

Powdercoated Aluminium Angle From Bunnings For A Neat Finish

I installed pinch weld on the edges to neaten things up and cover any potential sharp edges. I got rid of the sharp edges anyway just using a bit of emery paper wrapped around a sanding block. 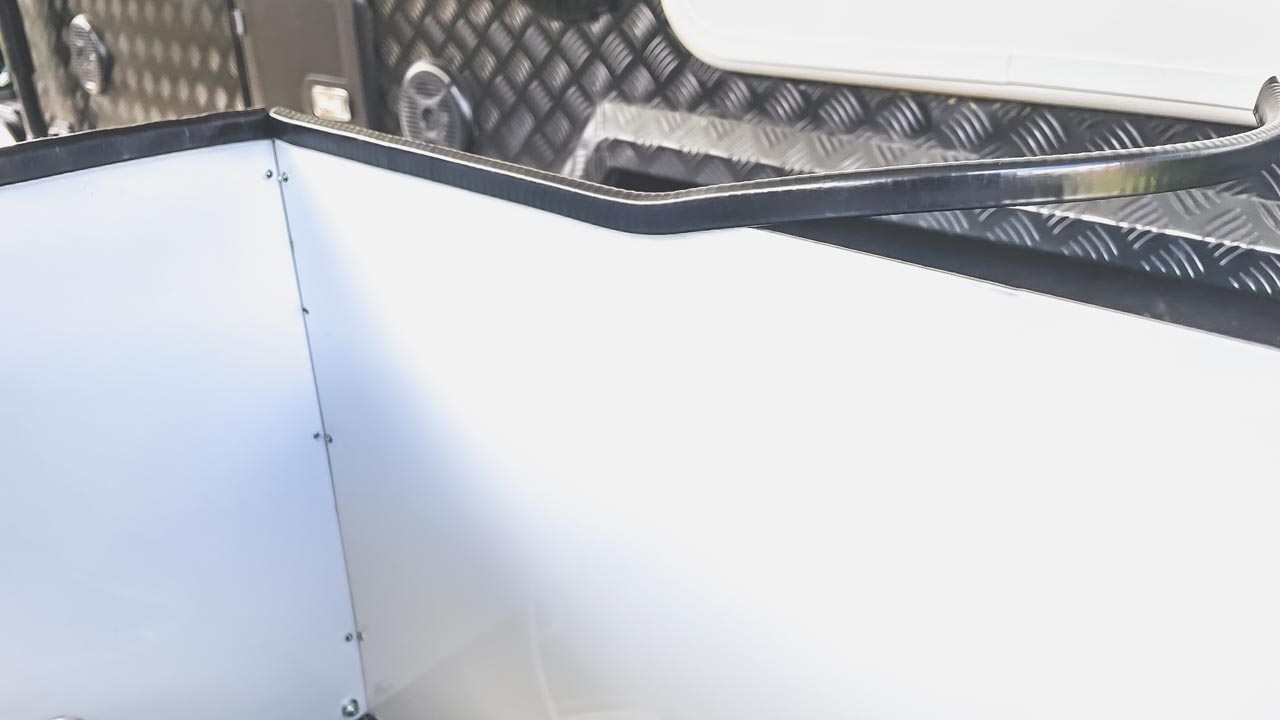 Are We Happy With The BBQ Slide Out And Storage box?

We’re very happy with the way it all turned out. Installing the caravan BBQ slide out in place of the outdoor kitchen has been a great thing for us. Now when we pull up all we have to do to use the BBQ is slide it out and plug the hose in to the bottle. As an added bonus the slide out with the box weighs 15kg instead of the slide out kitchens weight of nearly 60kg. That’s a weight saving of almost 45kg. 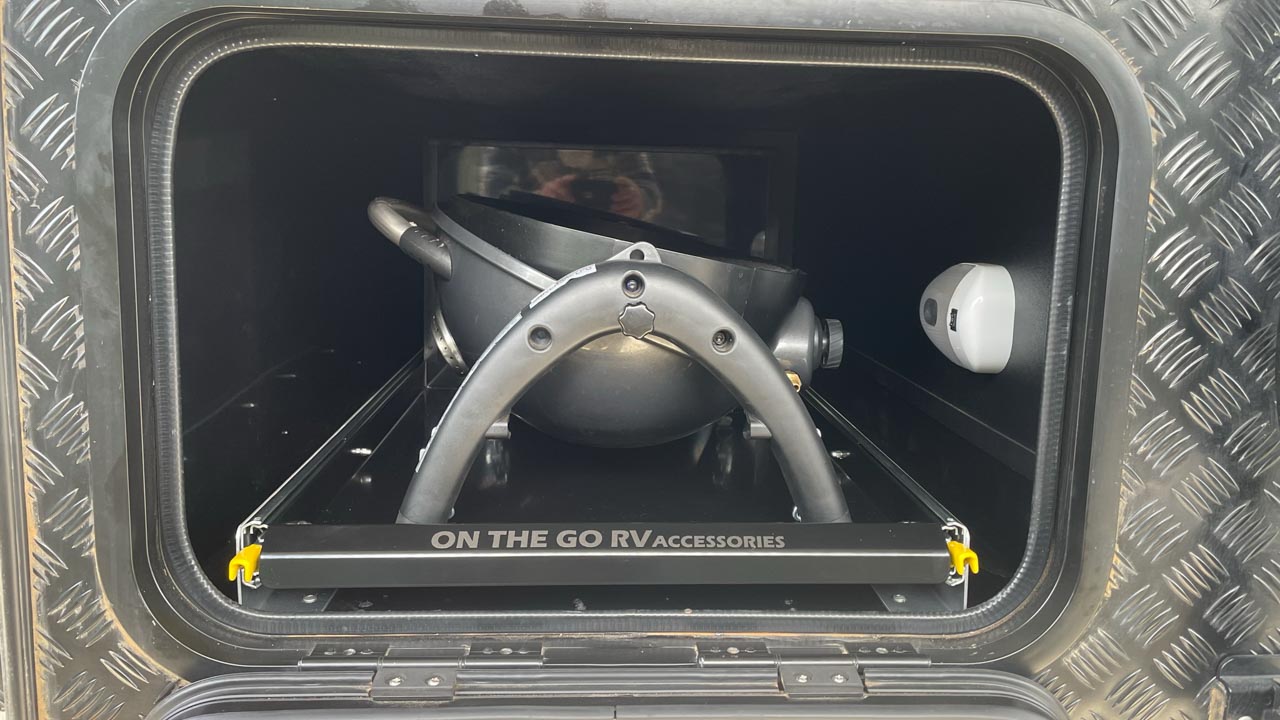